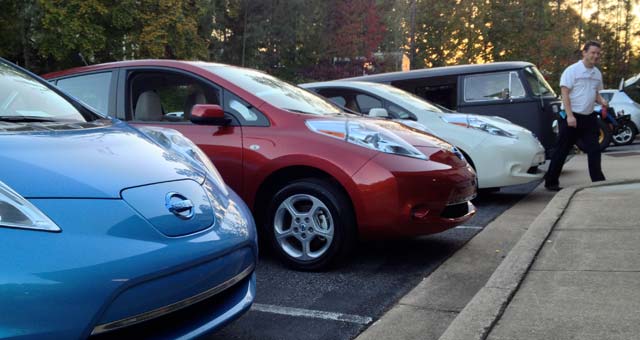 Sales of plug-in electric vehicles are strong, with combined purchases of models like the Nissan LEAF, Chevrolet Volt and Tesla Model S during their first 30 months on the market more than doubling the pace set by conventional hybrids when those vehicles made their U.S. debut in 2000.

Plug-in electric vehicles should have a total cost of ownership that is competitive with internal combustion engines in 2017, assuming five years of ownership and about 14,000 miles driven each year.

This was a key finding of a new Electrification Coalition (EC) report released in consultation with PricewaterhouseCoopers.

The study, “State of the Plug-in Electric Vehicle Market,” also finds that certain plug-in electric vehicles models are already capturing a high percentage of market share in their respective classes, including the Tesla Model S, which has registered an 8.4% stake in the luxury market in the first six months of 2013.

Additionally, the paper highlights consumer satisfaction surveys indicating that plug-in electric vehicles are outperforming their marketplace competitors on almost all counts, and expects that battery prices will fall about 50 percent to an industry average of $300-325 per kilowatt hour by 2020.

“The research shows that consumers love their electric vehicles and that EVs are well on their way to establishing a meaningful position in the overall automobile market,” said Robbie Diamond, President and CEO of the Electrification Coalition.  “Electric vehicles are the key to reducing America’s dangerous dependence on oil, and their strong early sales and earned consumer satisfaction bode well for improving our nation’s energy security in the years ahead.  However, we continue to believe that public policy, including greater funding for research and development, should play a stronger role in supporting this vital technology.”

Key findings of the paper include:

– Since market introduction in January 2011, more than 110,000 plug-in electric vehicles have been sold in the United States.

– Compared to hybrids’ first years on the U.S. market, twice as many plug-in electric vehicles have been sold since market introduction in 2011.

– The uptake rate of plug-in electric vehicles is nearly three times what it was for hybrids over their first three years on the market.

– Tesla’s Model S has captured 8.4 percent of the luxury market in the first six months of 2013, and sold more units than several in-class competitors including the Audi A8, BMW 7-series, and Mercedes S class.

– The Nissan LEAF has captured 3.3 percent of the sub-compact vehicle market.

– In comparing satisfaction surveys between PEVs and their marketplace competitors, PEVs outperformed their internal combustion engine (ICE) and hybrid counterparts on almost all counts.

– Battery costs are expected to drop by about half by 2020, when we project an industry average price of $300-325 per kilowatt hour.

Jul 27, 2013Blagojce Krivevski
North East Leads in Adoption Of Electric Vehicles in the UKThere is Future in Swappable Batteries