North East Leads in Adoption Of Electric Vehicles in the UK 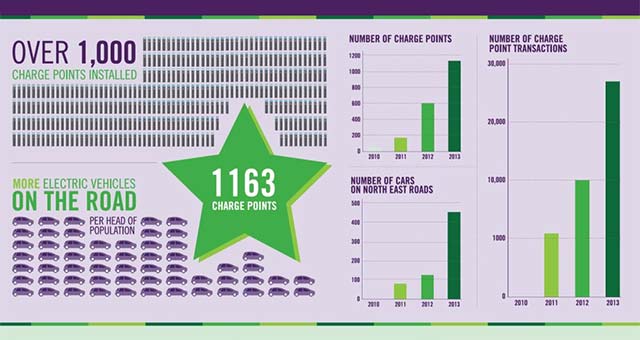 As the UK looks to electric vehicles as a way of reducing the emission of harmful gasses, the North East has led the way in developing an infrastructure to support the widespread uptake of the technology.

Set up in 2010 as one of the first Plugged in Places programmes funded by the Office for Low Emission Vehicles (OLEV), the Charge Your Car project has developed an integrated charging network for the region. Having addressed consumers’ EV concerns by providing more charge points than anywhere outside London, the North East now has the highest number of electric vehicles per head in the UK.

The network includes 737 standard points, 401 domestic charge points and 12 quick chargers that form the only connected quick-charge network in the UK. This visibility and public availability has been critical to increasing the number of vehicles sold, and extensive trials have helped reassure potential customers. “The Switch EV demonstrator trial showed that, for 90% of the time, North East EV drivers were no more than 5km from a charge point and that 93% of all trial participants’ journeys are less than 40km: well within range of modern EV technology,” says Wardle.

A core strength of the infrastructure in the North East is the number of motorists who now rely on it, and the frequency at which the charge points are utilised. Data shows that, in 2013, public charge points have been used 26,315 times, delivering 178,000kwh of electricity and reducing EV drivers’ fuel bills by £88,819 over a total of 745,133 miles. This equates to a saving of over 144 million grams of CO2, and reinforces the crucial role played by the North East if the UK is to further adopt EV technology.

“North East England is seen in a global context as being an area which is really helping drive the uptake of EVs,” says a spokesman from the Office for Low Emission Vehicles. “With the Nissan LEAF being produced in Sunderland, the development of this infrastructure has been critical to the UK’s success in implementing EV technology.”

The next step towards universal adoption of EV technology is to continue development of the first user operating system that allows drivers to use the charge point network. After successful operation in the North East for two years, the system, which is now operated in in partnership with Elektromotive, is being rolled out nationally and has already incorporated charge points from three other UK regions. 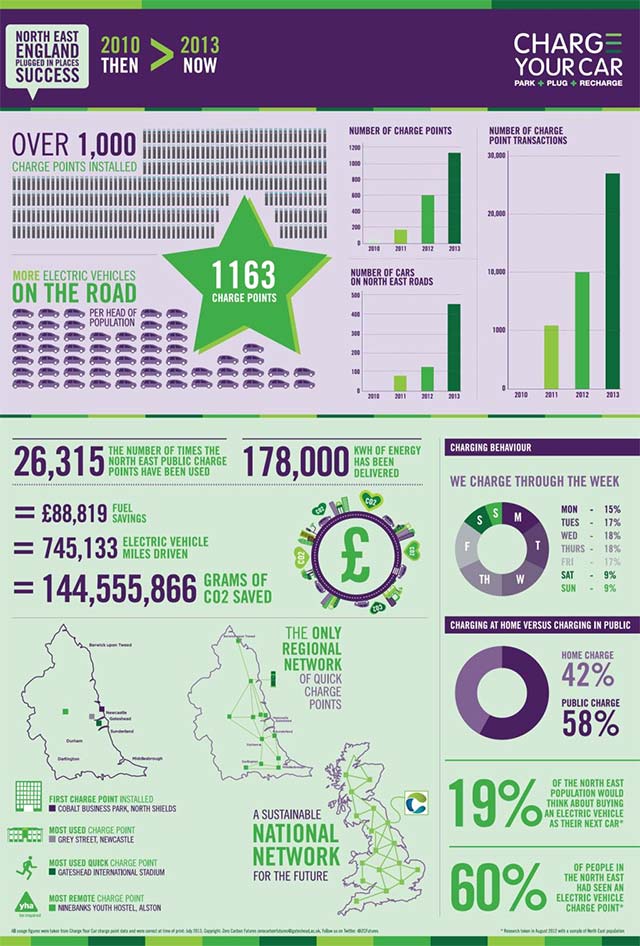