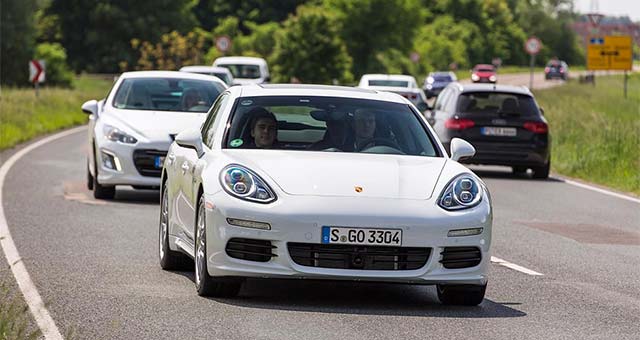 On the occasion of an international press event – in which over 42 test drives were conducted with journalists in the Panamera S E-Hybrid covering a total distance of over 1,200 kilometers (745 miles) – the model consumed just 4.4 l/100 km (64 mpg UK or 53.45 mpg US) averaged over all drives.

These results illustrate that in real everyday operation, it is entirely possible to attain fuel consumption values of the same magnitude as the value determined in NEDC testing, which is 3.1 l/100 km (91 mpg UK or 75.87 mpg US).

And it even accomplished this in four unmodified Panamera S E-Hybrid production cars, each carrying three to four persons, with the climate control system activated and accelerating up to 230 km/h (143 mph) on the motorway section of the route.

The test circuit, which had a total length of 28.7 km (17.8 miles), followed a course through and around the city of Hockenheim and comprised 6.5 km (4 miles) city driving, 9.2 km (5.7 miles) of country roads and 13 km (8 miles) of German Autobahn – some without speed limits. A prerequisite for attaining such values is systematically exploiting opportunities for charging the 9.4 kWh lithium-ion battery on the electrical grid.

The car’s range of 36 kilometers (22.36 miles) in all-electric driving was also confirmed in practice with a fuel consumption value of 0.0 l/100 km and zero local emissions, which was not only attainable in NEDC testing on a dynamometer, but also on the street. And it even attains this value at an average speed of 54 km/h (33.5 mph), while the average speed in NEDC testing is just 33 km/h (20.5 mph).

Porsche is implementing an integrated and universal solution that is unique worldwide in conjunction with the Panamera S E-Hybrid.

The German automaker has developed an integrated and comprehensive solution that covers all markets for the Panamera S E-Hybrid – a world car that will be driven on all continents.

Standard charging cables include one cable for the desired type of household electrical outlet and one for a selected industrial-type outlet. All other versions are available as options.