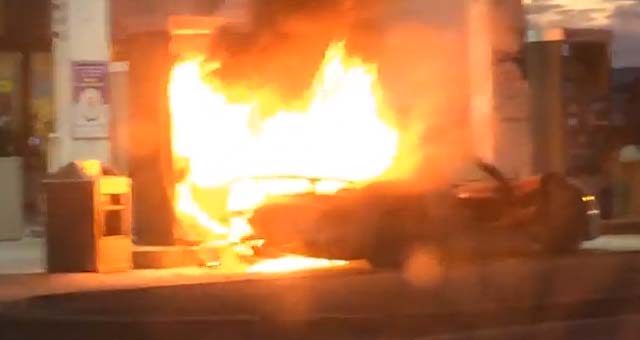 The exact cause of the fire remains unclear but something horrible either went wrong with the 918 Spyder or the fuelling equipment to start the blaze.

Regardless of the cause, the fire caused extensive damages and it’s highly unlikely this Porsche 918 Spyder will ever roam the streets again.

Designed from the start to be a high-performance hybrid, the 918 Spyder boasts an unprecedented combination of performance (offering the 887 hp output of a super sports car) and the virtually silent motion of an electric vehicle.

The Porsche 918 Spyder is able to accelerate from 0 – 62 mph in 2.8 seconds and offers an average standard fuel consumption of between 94 mpg and 85 mpg. The 918 Spyder also allows a combustion engine to be combined with an electric motor-based drive to further optimise the dynamic performance of the vehicle.