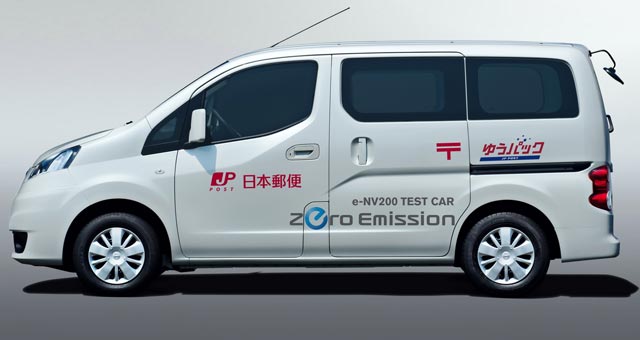 Saitama City is promoting the adoption of electric vehicles by linking up with a variety of stakeholders through its E-KIZUNA project. Begun in 2009, the project promotes EVs as a way to address global warming and realize a sustainable low-carbon society.

Nissan, which signed on at the start of the project, is discussing and cooperating with the City in the areas of building the charging infrastructure, creating demand and developing incentives, and building community awareness. The initial field tests for the van are part of Nissan’s commitment to these initiatives.

Saitama City will put the e-NV200 through its paces as it travels between Saitama City Hall and other municipal offices in the course of conducting regular business. The vehicle will be evaluated for environmental-friendliness, usability and economy. The City’s ultimate goal is to implement sustainable transportation solutions by promoting the adoption of EVs.

Nissan has been carrying out field tests since 2011 for the 100% electric e-NV200 with many major corporations. Nissan has already road tested the e-NV200 with several other major companies, including AEON Retail Co., Ltd., Tochigi Prefecture and FedEx Express in Japan, and British Gas and FedexExpress in Europe, while recently in Singapore, FedEx Express participated in tests as part of the company’s comprehensive global field testing program.

Results and feedback from field tests will be reflected in production model development. The 100% electric e-NV200 commercial vehicle follows the Nissan LEAF as the second EV to be sold globally. The e-NV200 establishes Nissan’s leadership in the zero-emissions domain even more firmly, and at the same time contributes significantly toward breakthrough innovation for commercial vehicles.

The e-NV200 offers all of the spaciousness, versatility and practicality of its base vehicle, the multipurpose commercial van NV200. It delivers advanced performance that can only be achieved through the powertrain of the Nissan LEAF. The e-NV200 provides exceptionally smooth acceleration and quietness, driving characteristics that are unique to electric vehicles, while emitting no CO2 emissions at the point of use.

e-NV200 displays great potential for businesses, with its advanced telematics system and power-supply function in the cargo compartment. Also, the model’s enviable running cost – a priority for most companies – will be highly attractive when competing in the commercial vehicle marketplace.