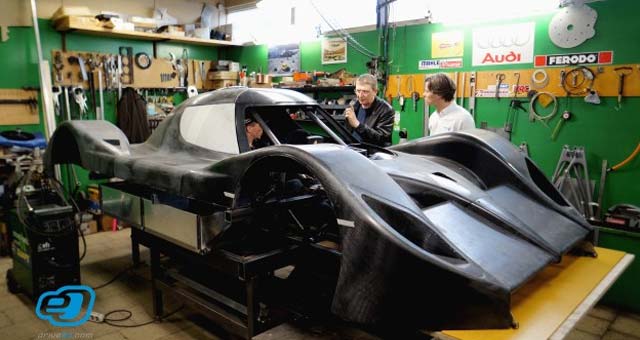 The ambitious rookie entry at the world famous hill climb competition on June 30th will be piloted by the Baltic touring car champion Janis Horeliks.

This year Pikes Peak is about to see the 91st gathering of daring drivers to climb the 20 km course to the summit at 4300 m above sea level. Over years, the entire length of the run has been gradually paved, bringing about the dominance of tarmac specification cars. The 2013 edition will feature an epic battle between the current record holder Rhys Millen, legendary Tajima Nabuhiro, aka Monster, and the 9-time world rally champion Sebastien Loeb in a 4×4 twin-turbocharged Peugeot 208.


So far no electric car has won the event outright but they are becoming a force to be reckoned with. As lithium ion batteries and electric motors shrink in size and grow in power, competitive results can be achieved over the short and twisty distance. And compared with internal combustion engines, electric motors suffer no power loss at high altitude where the air is rare.

“We know our technology is capable of breaking the current Pikes Peak record,” says eO chief engineer Andris Dambis, “but there is an incredibly tight field battling it out this year. We therefore acknowledge the unpredictable nature of the event but nevertheless aim to showcase previously unseen electric vehicle capabilities. That is the spirit at eO.”

The company is already well known for its ambitious electric motorsport projects. eO’s electric off-roader built in 2011 has completed 18 000 km in three continents, including the gruelling Dakar rally.

A thorough testing program with eO PP01 is planned this month ahead of shipping the vehicle to Colorado in early June.