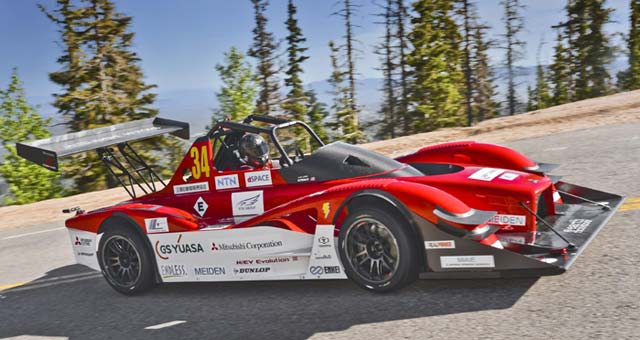 Finishing a mere 2.4 seconds behind overall 2014 Pikes Peak race winner Romain Dumas and his gasoline-powered Le Mans sports car prototype, the stage has been set for highly energy-efficient and sustainable electric-powered vehicles like the Mitsubishi MiEV Evolution III to soon become the dominant force in this challenging one-of-a-kind motorsport competition.

American Greg Tracy and his Mitsubishi MiEV Evolution III powered their way to overall victory in the Electric Vehicle division with a remarkably quick time of 9 minutes 8.188 seconds – a new record for the category.

With his triumphant pace in the 2014 Pikes Peak International Hill Climb, Tracy is the first participant in the event’s long-running history to record a sub-10 minute lap time in both two-wheel as well as four-wheel racing categories.

“The Mitsubishi Motors team prepared a fantastic car for me. This victory was truly a team effort,” said Tracy. “I want to thank the team and also Masuoka-san for developing such a phenomenal racing machine in the MiEV Evolution III.”

“First of all, I would like to congratulate Greg on winning the Electric Vehicle division – he drove the MiEV Evolution III spectacularly and definitely deserves this win,” said a gracious Masuoka. “I could not deliver an outright win, but I am proud to be a part of our excellent 1-2 finish. What’s more, as a team principal in addition to being a driver, it’s great to see our young and upcoming engineers excel in this racing program as they will play a key role in Mitsubishi Motors’ development of electric vehicle (EV) and plug-in hybrid electric vehicle (PHEV) technology in future vehicles.”[wzslider height=”400″ lightbox=”true”]