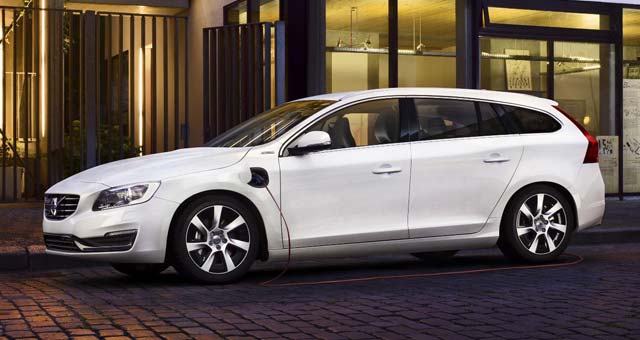 In this scheme, buyers will receive a £5000 grant towards the purchase price of the vehicle, meaning the Volvo V60 Plug-in Hybrid will be available with an on-the-road price of £43,775.

In order to qualify for the Plug-in Car Grant, the Volvo V60 Plug-in Hybrid had to fulfil a number of conditions, such as battery warranty, crash safety, battery safety and also CO2 emissions.

The driver of the V60 Plug-in Hybrid is putting an end to compromise via three driving mode buttons on the dashboard: Pure, Hybrid and Power.

In Pure mode the car is powered solely by its electric motor as much as possible. If the battery pack has been recharged with electricity from renewable sources, its range is up to 31 miles with no carbon dioxide emissions from the tailpipe. The electric range varies with terrain, climate and driving style.

Hybrid mode is the standard setting whenever the car is started. The diesel engine and electric motor cooperate to ensure optimal balance between driving pleasure and environmental footprint. CO2 emission (NEDC, mixed driving cycle for certification) is just 48g/km and it has a total range of up to 560 miles.

In Power mode the technology is optimised to give the car the maximum possible power. The diesel engine and electric motor have a total power output of 215+70 horsepower and maximum torque of 440+200Nm. The electric motor’s lightning-quick torque delivery contributes to the car’s acceleration from 0 to 62mph in 6.1 seconds.

The model year 2014 Volvo V60 Plug-in Hybrid will be unveiled at next week’s Geneva Motor Show and it features a number of updates to the styling of the interior and exterior.

Full price and specification levels of the Volvo V60 Plug-in Hybrid are expected during April, with customer deliveries taking place from July.

After the initial batch of 1,000 model year 2013 cars, production will increase to 4,000-6,000 cars as of model year 2014. The first year’s 1,000-car batch was sold out even before the car reached the showrooms and the order books for next year’s cars are already filling up.