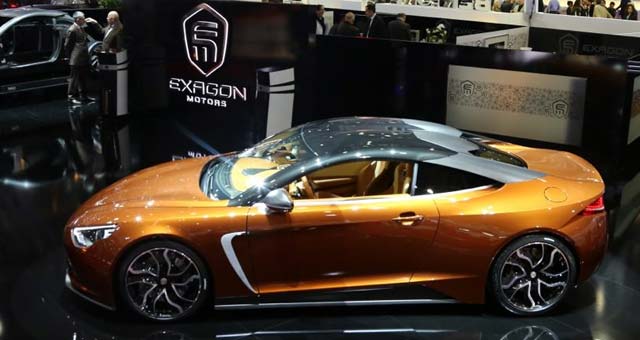 The Exagon Furtive-eGT electric supercar is now available for order and the first deliveries are expected by the end of the year.

The Furtive-eGT was first displayed in front of the public in prototype form at the Paris Motor Show back in 2010. The production model debuted at the Geneva Motor Show this month.

The Furtive-eGT is powered by two Siemens Inside e-Car motors, each developing 148 kW motors. Together they produce the equivalent of 395 hp at between 5,000 and 10,000 rpm. These exceptionally efficient, liquid-cooled motors are the most compact and lightest on the market. They are centrally mounted and mated to an innovative ZTI (Zero Torque Interruption), three-speed gearbox.

The Furtive-eGT being tested on the Nürburgring track

The battery installed in the Furtive-eGT, designed and manufactured by Saft, is based on the equipment used for satellites. Its cutting-edge lithium-ion technology guarantees a capacity of 53 kWh, enough for a driving range of up to around 360 kilometers or 224 miles.

After 3,000 charging cycles, over 80% of battery power remains – enough to take the car one million more kilometers. In fast recharge mode, the battery can reach between 30 and 80 percent charge in 32 minutes. The third key element, located between the battery and the motors, are the inverters, which manage the propulsion units by controlling the amplitude and frequency of the electrical energy to vary the torque and motor speed. They were specially developed by Siemens to meet the needs of the Furtive-eGT.