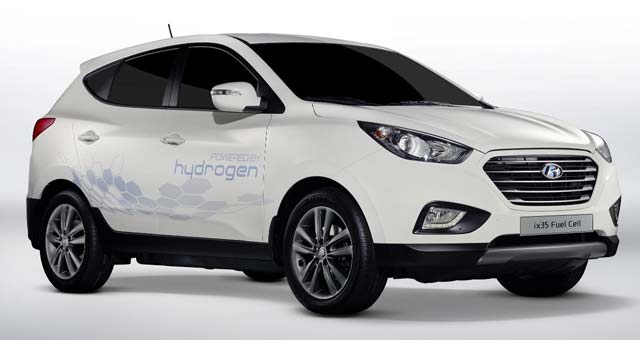 The Hyundai ix35 Fuel Cell has been selected for the second consecutive year by the European Commission-backed Fuel Cells and Hydrogen Joint Undertaking (FCH JU) to demonstrate the real-world benefits of hydrogen fuel cell technology.

The world’s first production fuel cell electric vehicle, the ix35 Fuel Cell, will be made available throughout 2013 to members of the European Parliament, European Commission officials and other policymakers for test drives in Brussels, Belgium.

Hyundai Motor was awarded its first leasing contract for a hydrogen-powered fuel cell car by the FCH JU in October 2011.  Over the course of 2012, the ix35 Fuel Cell was presented to EU decision-makers, stakeholders and the general public at a number of demonstration drives and public events in Brussels and other locations across Europe.

Hyundai plans to build 1,000 examples of the ix35 Fuel Cell by 2015 for lease to public and private fleets, primarily in Europe, where the European Commission has established a road map for construction of a pan-European hydrogen fuelling station network.  A total of 17 ix35 Fuel Cell vehicles have already been ordered by the cities of Copenhagen, Denmark and Skåne, Sweden.

Leading automakers, including Hyundai, have declared support for more refuelling stations to prepare the market for mass production of hydrogen fuel cell vehicles.

The ix35 Fuel Cell is the result of 14 years and several hundred million euros of research by hundreds of engineers at Hyundai Eco Technology Research Institutein Mabuk, Korea.  The car has logged more than 3 million kilometers of road tests in real-world conditions in Europe, Korea and the U.S.