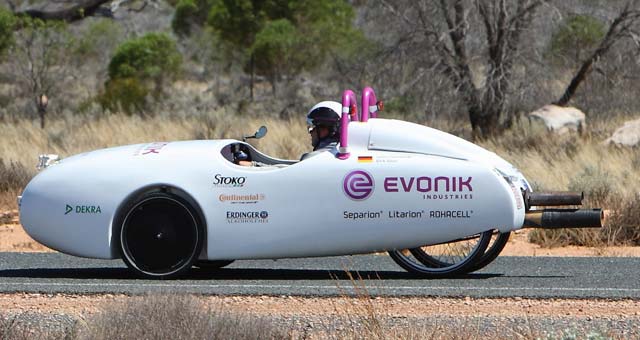 Evonik Corporation recently showcased the Wind Explorer EV – a lightweight, electric car that crossed Australia on less than $15 of electricity – at the company’s facility in Parsippany, New Jersey.

The Wind Explorer EV, piloted by German extreme sportsmen Dirk Gion and Stefan Simmerer, ran on a lithium-ion battery developed from Evonik’s LITARION®electrodes and SEPARION® ceramic separators. The SEPARION® technology is manufactured exclusively by Evonik and allows the battery cells to store energy generated from a portable wind turbine.

The Wind Explorer weighs 200 pounds and carries another 200 pounds in lithium ion batteries and a 40 pound kite. It completed its trip from Albany to Sydney, Australia, with a total distance of approximately 3,000 miles from Jan. 26 to Feb. 12, 2011.

According to Senior Scientist Bill Bunting, Australia was picked as a test location because it has uncrowded highways and coastal wind, helping the kite. The pair spent less than $15 on electricity.

The wind-powered electric car produced virtually zero emissions during the 3,000 mile Australian journey, a distance roughly 200 miles further than from New York City to Los Angeles. The Wind Explorer was constructed from Evonik’s ROHACELL® sandwich carbon fiber, reducing the body’s weight to allow the vehicle to travel hundreds of miles by kite. The Wind Explorer was so resource efficient that the wind turbine carried aboard could produce enough energy to travel 175-225 miles a day.

The Wind Explorer pilots set three world records during their coast-to-coast trip across Australia, including the first time a continent had been crossed by a vehicle powered by wind and lithium-ion batteries, the longest overall distance covered by an exclusively wind-powered automobile, and the longest distance covered in 36 hours by an electric and wind-powered vehicle.[wzslider height=”400″ lightbox=”true”]