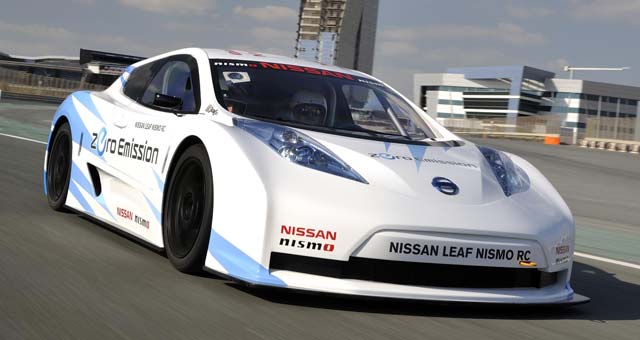 The name on the back panel, just under the massive adjustable rear wing, says Nissan LEAF. The powertrain is an 100 percent zero emission advanced Lithium-ion battery design, just like that found on the world’s first affordable mass market electric vehicle.

And despite its lack of rear doors, rear seat, trunk, audio system, navigation, carpeting and other amenities, there is a discernable family resemblance.

But that is where the similarities between the production Nissan LEAF and the Nissan LEAF NISMO RC end. As indicted by the “RC” – for Racing Competition – this is an electric vehicle that is purpose-built to bring new meaning to the term “Racing Green.”

Since its debut at the New York Auto Show in April 2011, the LEAF NISMO RC has made a series of special demonstration appearances at various motorsports venues, including the Goodwood Festival of Speed. It had its competition debut in September 2012 in a 50 km (31 mile) EV race at the Sportsland Sugo circuit in Sendai, Japan – where it finished second to a more powerful vehicle.

Dimensionally, the racecar features a 3.9-inch shorter wheelbase, is 0.8 inches longer and 6.7 inches wider. The most dramatic difference is height, with the NISMO RC sitting more than a foot (13.8 inches) lower than the production Nissan LEAF. Ground clearance is limited to 2.4 inches, compared to 6.3 inches for the road going car. And, at 2,068 pounds, the racecar weighs in at about 40 percent less than the production vehicle.

The layout of the NISMO RC is also markedly different from the production sedan, offering a mid-ship location for the battery pack, electric motor and inverter – with drive to the rear wheels versus the production Nissan LEAF’s front-wheel drive. The NISMO RC also utilizes a double-wishbone suspension design front and rear and driver-adjustable brake balance. It rides on 18-inch 6-spoke wheels and 225/40R18 Bridgestone racing tires.

Like the production Nissan LEAF, the NISMO RC is powered by a lithium-ion battery composed of 48 compact modules and a high-response 80kW AC synchronous motor that generates 107 horsepower and 207 lb-ft of torque. It can be charged up to 80 percent of its full capacity in 30 minutes using the quick charging port located inside
the rear cowl.

The NISMO RC produces 0 to 62 mph acceleration in 6.85 seconds and a top speed of 93 miles per hour. It has a running time of around 20 minutes under racing conditions.