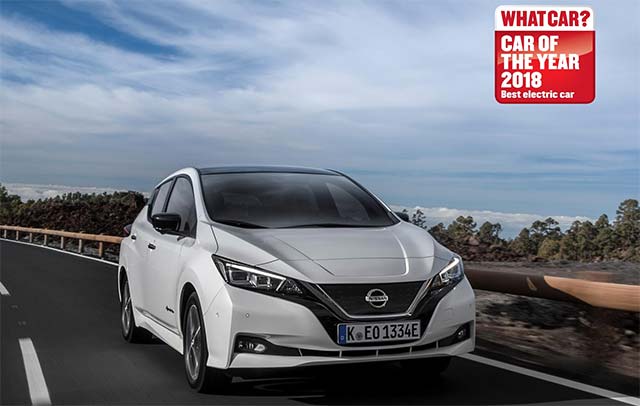 The all-new 2018 Nissan LEAF has been named ‘Best Electric Car’ at the 2018 What Car? Awards, just as the car arrives in showrooms across the UK.

Steve Huntingford, Editor of What Car?, praised the award-winning model, saying; “The electric car market has never been more competitive, yet the new Nissan LEAF saw off all its rivals because it makes the most sense to most buyers. It combines excellent performance with generous standard equipment and low running costs. And even in winter weather, its real-world range is good.”

Nissan’s xStorage was also ‘Commended’ in the ‘Technology Award’ category, an accolade which recognises innovative new technology developments. xStorage is an energy storage system that uses recycled batteries from Nissan’s electric vehicles, allowing customers to store energy to run their homes, and even sell excess power back to the National Grid.

2018 marks the 40th anniversary of the What Car? Awards which is one of the most widely-recognised and respected awards amongst car buyers. Over 114 cars are judged against 21 different awards categories.

Nissan GB Managing Director Alex Smith attended the awards ceremony in London to receive the award on behalf of Nissan.

Smith commented; “When we launched the first Nissan LEAF in 2011, there was some scepticism as to whether the world was ready for a mass-market EV. Today, Nissan is the global leader in producing accessible, affordable, all-electric mobility with more than 300,000 electric vehicles sold worldwide.”

The all-new LEAF offers a significant update over the previous model with dynamic new styling, advanced technologies and a higher capacity drivetrain which delivers significant increases in both range and power.

The 2018 LEAF is also the first Nissan model in Europe to feature Nissan’s autonomous ProPILOT technology as well as e-Pedal, which allows drivers to start, accelerate, decelerate and stop – simply by increasing or decreasing the pressure applied to the accelerator.

The official UK on-sale date for the full LEAF range is 2nd February – though a LEAF 2.ZERO special launch version has been open for pre-orders since October.

In the UK, prices start at £21,990 OTR (including the £4,500 Government Grant), for entry-grade Visia models, with range-topping fully equipped Tekna grade versions from £27,490 (also including Govt. Grant).