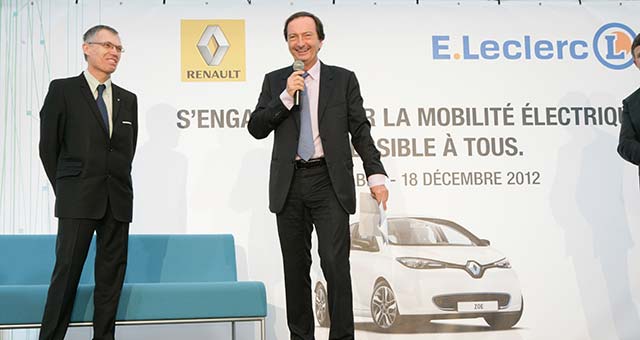 Renault and E. Leclerc, France’s leading retailer, are confirming their commitment to sustainable development and electric mobility in France, with the launch of the “Z.E. Club des 50”, which will function from early 2013.

In each region, an E. Leclerc centre and a Renault dealership will work together through the Club to deploy charging stations and thus make Zero Emission mobility available to the greatest number.

In Brittany, the E. Leclerc centre of Pont l’Abbé and the Renault dealership in Quimper are the first members of this Club, which aims to bring together players and ambassadors of electric mobility in each region.

Heralding this initiative, ten Renault ZOE vehicles were delivered on Tuesday to Patrick Bellec owner of the E. Leclerc centre in Pont l’Abbé.

The ten Renault ZOE vehicles ordered by Patrick Bellec at the Paris Motor Show are intended for use as company cars, to be driven by ten employees from the store who have fitted wall boxes for home charging.  The employees will also be able to recharge their cars at work, where 11 stations, or 22 sockets, are available in the car park of the E. Leclerc centre in Pont l’Abbé. This equipment will be accessible to all owners of electric vehicles.

As France’s leading retailer, E. Leclerc encourages more responsible consumption practices and has long been committed to protecting the environment. As part of this approach, E. Leclerc has joined forces with a number of manufacturers, including Renault, and with the authorities, to encourage the use of electric vehicles in France, by installing charging stations in its store car parks.

Currently, more than 20 E. Leclerc centres have made charging stations available to their customers. The “Z.E. Club des 50”, establishing local links between Renault and E. Leclerc, should become the “Z.E. Club des 500” in the longer term, bringing together the 500 E. Leclerc members investing in Z.E. and the 500 Renault dealers present across France. The club’s objective will be to develop electric mobility in France, by raising public awareness through communication initiatives. This will involve presenting products on the respective sites of both companies, developing charging stations at Leclerc centres, organizing joint initiatives with municipalities and maintaining an ongoing dialogue between management committees locally.

The ten Renault ZOE vehicles delivered to E. Leclerc are forerunners to the mass launch across the Renault network in spring 2013. With ZOE, Renault makes zero emission mobility available to the greatest number. ZOE is the first supermini designed as a car that is 100% electric and priced at an affordable €13,700 incl. VAT (price in France, after deduction of the tax incentive). It embodies Renault electrical expertise with the most advanced electrical technology. More than sixty patents were filed as part of the design process for ZOE. Currently being rolled out across France, ZOE is spearheading Renault’s electric range, with a range of 210 km over an NEDC cycle.