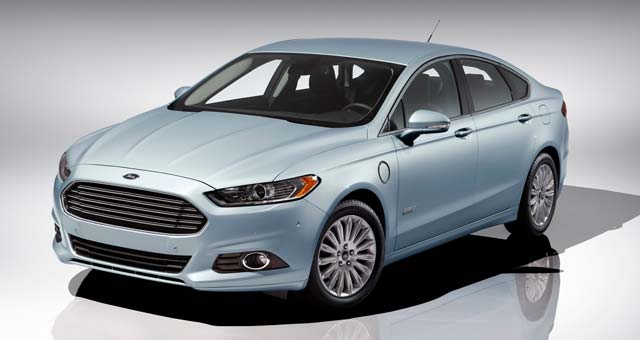 The 2013 Ford Fusion – recently voted Green Car of the Year – just got greener as the U.S. Environmental Protection Agency certified the new Fusion Energi plug-in hybrid at up to 108 MPGe, making it America’s most fuel-efficient sedan.

Fusion Energi is the Ford brand’s fifth electrified vehicle to launch in the past year and is expected to accelerate the company’s record hybrid sales pace, including its highest monthly hybrid sales month ever in November.

The EPA also certified Fusion Energi to deliver up to 92 MPGe highway and a combined 100 MPGe – figures that could potentially help save customers an estimated $6,850 in fuel costs compared with an average new car over the course of five years.

Adding to Fusion Energi’s value – and the myriad ways it beats Toyota Prius plug-in – are its innovative technologies that are designed to help win over both novice and pro hybrid owners.

SYNC® with MyFord Touch® offers multiple ways – including voice commands – for customers to manage and control their phone, available navigation, entertainment and climate functions. Plug-in hybrids and all-electric models have additional options for monitoring information like battery state of charge.

With Fusion Energi and Fusion Hybrid, the all-new Fusion lineup brings the widest range of powertrain options to the U.S. midsize segment. Fusion also is available in gas-powered versions with a choice between a pair of fuel-efficient EcoBoost® engines and a normally aspirated four-cylinder engine.

The addition of Fusion Energi gives customers yet another Ford option when shopping for an electrified vehicle – already available are Focus Electric, Fusion Hybrid, C-MAX Hybrid and C-MAX Energi.

Many of the innovative technologies of Fusion Energi are shared across Ford’s electrified vehicle lineup and draw from the automaker’s portfolio of about 500 patents related specifically to hybrid technology:

– MyFord® Mobile: Enables access via smartphone or Web-based interface to perform key tasks, such as monitoring a vehicle’s state of charge and current range or locating charge stations and planning routes to find them
– Eco cruise: Saves vehicle energy by relaxing acceleration compared to standard cruise control
– EV mode button: Conveniently mounted on the console to the right of the shifter – allows a driver to switch vehicle operation between three modes: all-electric, normal hybrid operation and conserve battery power for later use
– Regenerative braking is capable of capturing and reusing more than 90 percent of the braking energy normally lost during the braking process
– Hybrid transmission, designed by Ford engineers in-house, is capable of operating at high speeds and in a smooth, fuel-efficient manner at the same time
– Advanced lithium-ion batteries used in Ford’s electrified vehicle lineup – covered by an eight-year/100,000-mile component limited warranty – are smaller and lighter than nickel-metal-hybrid batteries used in previous-generation hybrids
– Charge port with LED light ring, conveniently located on the driver’s side and near the front of the car, it features a light ring that illuminates to indicate charge status