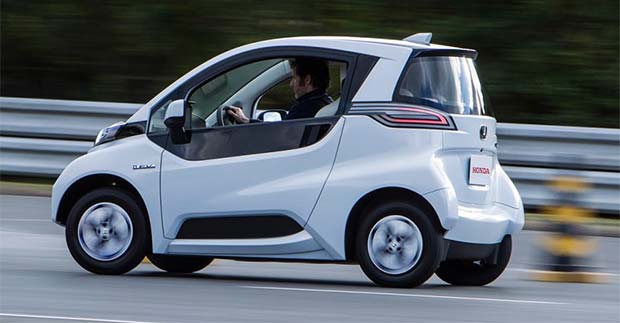 Advancing the Micro Commuter Concept that was first introduced at the Tokyo Motor Show 2011, this prototype model realized a cabin space to seat one driver and two children in the micro-sized body.

Other features of the Micro Commuter include the use of a user-owned tablet device for the application of functions such as meter display, navigation, audio and back-up camera display, and the ability to charge the battery of the tablet using solar cells mounted on the vehicle roof.

The Honda Micro Commuter is just 2.5m long, 1.25m wide and 1.45m tall. Honda has released few details about the Micro Commuter, aside from the fact that is powered by a rear-mounted electric motor and a 15kW lithium-ion battery, has an approximate range of 37 miles (about 60 km) and maximum speed of 50mph (80 km/h).

The Micro Commuter is based on a ‘Variable Design Platform’ that should spawn other body styles. Honda expects that this concept will branch out into transport for the elderly, car-sharing schemes, home delivery services and public sector use.

Using vehicles based on this prototype model, Honda will begin demonstration testing in Japan in 2013.

This vehicle was developed in consideration of the vehicle categories for micro-sized mobility products that are currently being discussed under the initiative of the Ministry of Land, Infrastructure, Transport and Tourism in Japan as well as for the regulations for the L7 category in Europe. L7 is one of the motorcycle categories in Europe. An EV in this category must weigh 400 kg or less excluding the weight of the battery and have output of 15 kW or less.[wzslider height=”400″ lightbox=”true”]