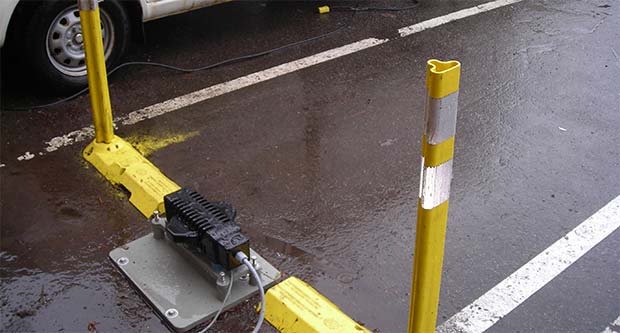 Prof. Lorne Whitehead, with the university’s physics department, says his team has developed a way to wirelessly recharge the vehicle using a frequency 100 times lower than what’s used now.

Their solution uses “remote magnetic gears” – a rotating base magnet driven by electricity from the grid, and a second located within the car – to eliminate the use of radio waves. The base gear remotely spins the in-car gear, which in turns generates power to charge the battery.

“Wireless charging has been a much sought-after technical solution for everything from cell phones to electric cars,” says UBC Physics Prof. Lorne Whitehead. “A significant concern for charging cars wirelessly has been the high power and high frequency electromagnetic fields and their unknown, potential health effects on humans.”

The technology has been successfully tested on UBC service vehicles and given rave reviews by drivers who no longer have to wrestle with cords and sockets in often cramped conditions and bad weather. Instead, all they have to do is drive up to one of the four charging devices installed at UBC’s building operations lot and park. The car fully recharges in four hours, roughly the same amount of time it takes with an electrical outlet. It is then good to go for eight hours.

The team originally conceived the magnetically driven charging system for medical devices such as an implanted pacemaker. The larger system, supported by the NSERC Idea to Innovation Grant, was tested at UBC as part of the Campus as a Living Laboratory initiative and provides valuable data for further research and development. A patent for the technology has been filed through the University Industry Liaison Office.