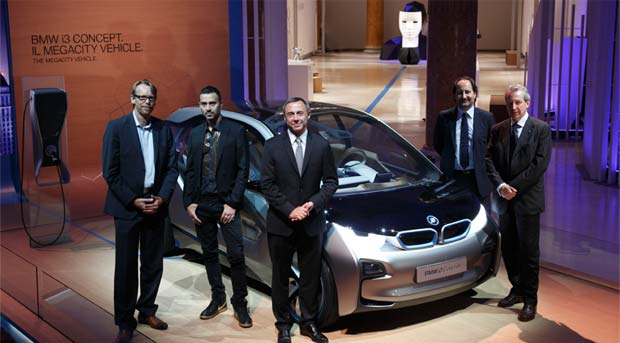 BMW of North America said that the BMW i “Born Electric” world tour will arrive in New York City on November 13th – 18th offering the public an opportunity to explore the future of mobility through new vehicles including the North America debuts of the BMW i8 Spyder Concept and next generation BMW i3 Concept, interactive displays and demonstrations of technologies that will help shape the way we move in and around our cities in the future.

The BMW i world tour stop in New York City, at 1095 Avenue of the Americas (between 41st & 42nd Streets), will be presented under the banner, “The Future is Closer than You Think” and feature discussions exploring the significant mobility challenges facing America’s largest cities and highlight some of the initiatives being implemented to meet those challenges.  The event will also include forward-looking discussions of other transportation issues that are likely to impact our cities in the years and decades to come.

The event will also feature the North American debuts of the BMW i8 Spyder Concept and the next generation BMW i3 Concept.  The BMW i3 and i8 will become first purpose-built electric and hybrid-electric production vehicles to be made primarily from carbon when they become available in 2013 and 2014 respectively.

The seven-city, year-long global tour exploring the future of mobility is an initiative of BMW i, BMW’s visionary and sustainable brand dedicated to the development of new vehicles and services aimed at solving the mobility challenges facing the world’s most densely populated cities.

The BMW i Born Electric Tour kicked-off in Rome in June 2012, making stops in Dusseldorf and Tokyo prior to New York.  Following the New York stop, the tour will travel to London (January 2013) and Paris (March 2013) before ending in Shanghai (June 2013).