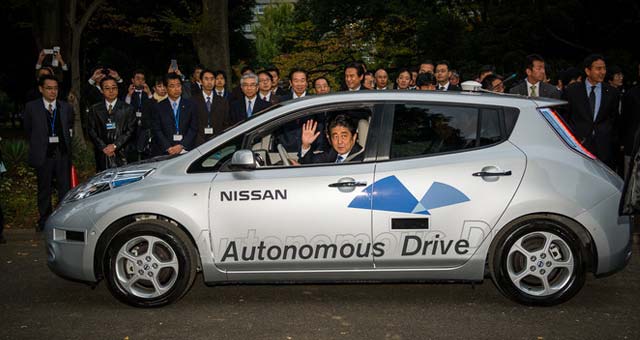 Nissan’s Autonomous Drive test car has taken to the public roads in Japan for the first time, with the country’s Prime Minister Shinzo Abe on board.

The all-electric Nissan LEAF vehicle, which was the first with autonomous drive capability to be granted a license plate in Japan, drove on the roads around the National Diet Front Garden, a public park in the center of Tokyo between Japan’s parliament and the Imperial Palace.

The attendance of the Prime Minister underlines the support of Japan’s government for the development of autonomously driven vehicles, which have the potential to become a prime factor in Japan’s economic growth.

“With the public road demonstration for the Autonomous Drive held in the presence of the Prime Minister, I believe that a great step has been taken towards the realization of Autonomous Drive. Nissan will pursue a safer, more comfortable and environmentally-friendly mobility by further fortifying our cooperative relations with the many government agencies and people involved,” Nissan Vice Chairman Toshiyuki Shiga said.

The all-electric Nissan LEAF is serving as a base vehicle for the development of autonomous drive technology. Driving on public roads is made possible with technology to detect road conditions. The vehicle is equipped with cameras, laser scanners and radar, which identify nearby pedestrians, traffic lights, traffic signs and other objects. The data is processed by an on-board computer that makes decisions which are implemented with automatically operated controls for the vehicle’s acceleration, handling, brakes and more.

Nissan first revealed the autonomous drive prototype technology at “Nissan 360,” a vast test drive and product showcase event held in California in August-September 2013. The company announced it will be ready with commercially-viable Autonomous Drive by 2020, and the technology will be available across the model range within two vehicle generations. Work has begun on a purpose-built Autonomous Drive proving ground at a Nissan facility in Japan to test the vehicles in extreme situations to ensure the technology is safe. Nissan engineers and researchers are collaborating with top-flight universities and institutions around the world as they continue efforts to make commercially viable Autonomous Drive a reality.