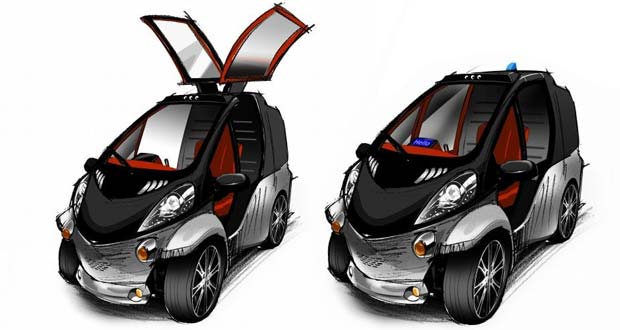 The Smart INSECT is an ultra-compact, single-passenger electric vehicle based on the COMS EV produced by TMC subsidiary Toyota Auto Body Co., Ltd.

It is equipped with technologies such as motion sensors, voice recognition and behavior prediction, required for next-generation communications-linked services.

The Smart INSECT, which connects with its driver and his or her home via the cloud-based Toyota Smart Center, embodies the concept of services that communicate with users to support the convenient, comfortable use of cars in their daily lives.

The Smart INSECT will be displayed and demonstrated at the Toyota Booth at CEATEC JAPAN 2012 (Japan’s version of Consumer Electronics Show), an advanced technologies exhibition to be held from October 2 through October 6 at Makuhari Messe in Chiba City, Japan.

1. The Smart INSECT’s front-mounted motion sensors use facial-recognition technology to detect and authenticate a driver registered with the vehicle when he or she approaches.

2. The vehicle communicates with the driver by flashing the front lights and greeting the driver via the instrument panel monitor, for example, with “Hello” and other displayed phrases and spoken responses.

3. The motion sensors detect the driver’s movements, opening the door according to the movement of the driver’s hand.

4. A “virtual agent” at the Toyota Smart Center recognizes the driver’s voice and, through communication with the driver, predicts his or her intentions, setting the destination and operating various functions of the vehicle, such as the fog lamps and audio system.

5. Smartphone navigation and content can be operated by voice command via the virtual agent.

6. Through the virtual agent and voice commands, the driver can, for example, checknd operate the locks and air conditioners of his or her home from within the vehicle.