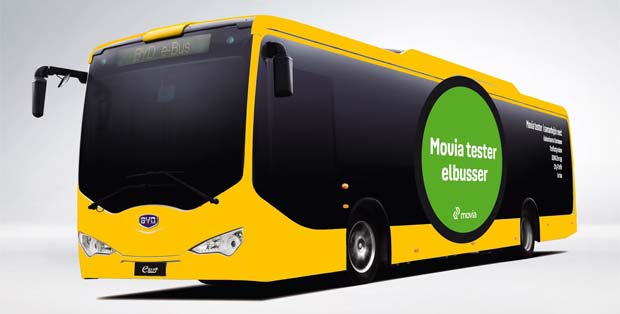 Denmark’s largest public transport agency Movia and BYD Europe have announced the introduction of the first full-size pure electric buses to enter service in Copenhagen, which has set itself an ambitious goal in terms of sustainable mobility: to become the world’s first zero-emission capital by 2025.

The two electric buses provided by BYD will operate on trial service on different passenger-carrying routes with different loads in Copenhagen for two years. The project is being carried out in cooperation with the Municipality of Copenhagen, DONG Energy, City-Trafik and Arriva.

The BYD electric bus is 12 meter long (40 feet). It is able to run 250 km (155 miles) on a single charge in urban conditions. The Fe battery (Iron Phosphate battery) fitted in the BYD electric bus boasts the highest safety, longest service life and most environmentally-friendly rechargeable chemistry and contains no heavy metals or toxic electrolytes.

BYD electric buses are now in regular passenger service in several cities in China, Europe and North America, making BYD the largest electric bus manufacturer in the world. The accumulated mileage achieved for BYD electric buses by the end of May 2012 has reached over7 million kilometers (or 4.35 million miles).