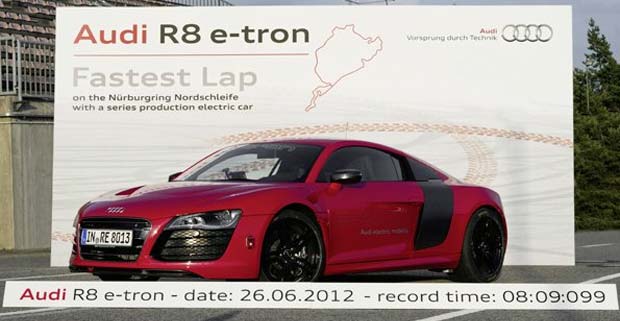 Audi R8 e-tron has set a world record for a production vehicle with an electric drive system on the Nurburgring Nordschleife – the toughest test track in the world.

“The R8 e-tron has given  a magnificent demonstration of its potential on the toughest race track in the world,” said Michael Dick, AUDI AG Board Member for Technical Development. Dick, who completed a fast lap himself in the R8 e-tron, added: “The record-setting drive confirmed that we are on the right track. To us, electric mobility has never been about sacrifice, but rather is about emotion, sportiness and driving pleasure.”

The drive system of the Audi R8 e-tron that Markus Winkelhock drove to the world record corresponds in every detail with that of the production model that will come on the market at the end of the year. Both of the car’s electric motors generate an output of 230 kW and 820 Nm of torque; more than 4,900 Nm (3,614.05 lb-ft) are distributed to the rear wheels nearly from a standing start.

The R8 e-tron’s rechargeable lithium-ion battery stores 49 KWh of energy – enough for a distance of about 215 kilometers (133.59 miles). Its “T” shape allows it to be installed in the center tunnel and in the area between the passenger compartment and the rear axle. It is charged by energy recovery during coasting and braking. The ultralight car body of the Audi R8 e-tron is made primarily of aluminum, along with CFRP components; this is a main reason why the high-performance sports car weighs just 1,780 kilograms (3,924.23 lb), despite the large battery.

In order to further underscore the production-relevance of the R8 e-tron and the capability of its drive technology, Audi has set another record on the Nordschleife in addition to the single lap record time. Immediately afterwards, Markus Winkelhock drove two fast laps in one go in a second R8 e-tron that was limited to 200 km/h (124.27 mph). At 8:30.873 and 8:26.096 minutes, both laps were well under the important nine-minute threshold.

The record time 7:47.794 minutes for an electric vehicle in all categories was achieved last year by the Toyota’s electric race car prototype — the TMG EV P001.[wzslider height=”400″ lightbox=”true”]