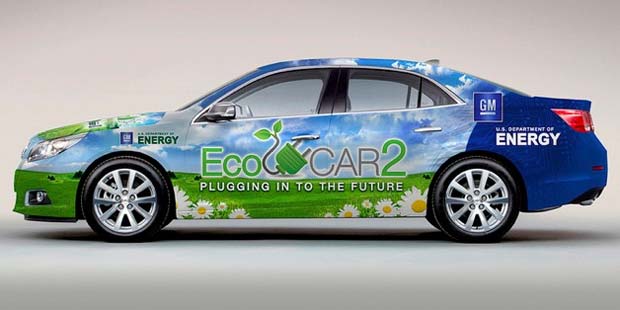 EcoCAR 2: Plugging In to the Future named Mississippi State University its Year One winner at the EcoCAR 2012 Competition in Los Angeles.

The 15 universities competing in EcoCAR 2 gathered for six days of judged competition this week with $100,000 in prize money up for grabs.

EcoCAR 2, a three-year competition sponsored by the U.S. Department of Energy (DOE), General Motors (GM) and 25 other government and industry leaders, gives students the opportunity to gain real-world, eco-friendly automotive engineering experience while striving to improve the energy efficiency of the 2013 Chevrolet Malibu.

Throughout the competition events in Los Angeles, EcoCAR 2 teams put their designs to the test, giving presentations to industry and government professionals based on their mechanical, electrical, control and HIL strategies, project initiation approval, outreach and business plans, and trade show display.

While Mississippi State won the top prize, it wasn’t the only winning team at the Year One Finals. The eco-engineering teams participated in more than a dozen different events ranging from outreach to powertrain design as they competed for more than $100,000 in prize money. In addition, the second place team is The Ohio State and University of Waterloo took third place overall. Now that their vehicle architectures are finalized, the 15 teams also received the keys to the GM-donated 2013 Chevrolet Malibu they will spend the next two years rebuilding, testing and refining.

“Our goal is to provide students with the most realistic career experience, and we chose the 2013 Chevrolet Malibu for EcoCAR 2, as we believe it is a great platform to allow students to show us what they can do,” said Kent Helfrich, executive director, electronic controls and software engineering, of General Motors. “The students are exercising their talents and are truly making great strides. We look forward to their developments over the next two years.”[wzslider height=”400″ lightbox=”true”]