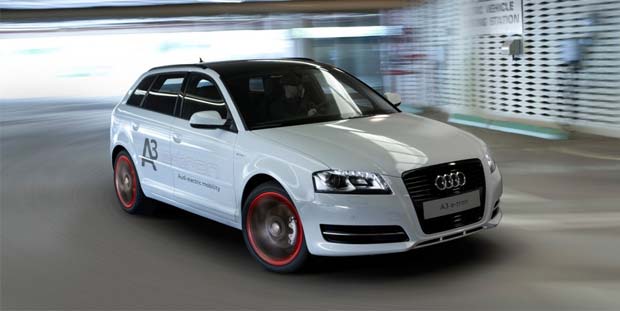 The Audi A3 e-tron pilot program will take place in the San Francisco, Los Angeles, Washington D.C. and Denver markets, where Audi engineers and technical experts will explore electric cars in a real world-setting and monitor how e-tron technology operates in everyday use.

Audi made the announcement of the engineering-based pilot program for the A3 e-tron today at TED2012 in Long Beach, Calif., where Audi is presenting a vision for the role transportation will play in the world’s increasingly congested urban centers of the future.

The Audi Social Space will present a variety of perspectives on this topic on touch-screen video installations allowing attendees to pose new mobility scenarios for future urban spaces and contribute in real time to Audi’s live Twitter feed through the #AudiTED hashtag.

Audi A3 e-tron features a fully electric powertrain with a 26kw lithium-ion battery, and zero driving emissions.  Providing a sporty driving dynamic, Audi A3 e-tron has 199 lb-ft torque, a battery range of approximately 90 miles and a top speed of 90 mph all while retaining the full interior space and versatility of the A3.

The Audi A3 e-tron continues Audi’s plug-in vehicle line-up that started with the Audi e-tron unveiled at 2009 Frankfurt Show, than the smaller e-tron concept in Detroit last year, the R8 e-tron and the e-tron Spyder, and continued with the A1 e-tron.

The e-tron name indicates that an advanced electrified power train with a plug-in capability is onboard. As a core philosophy of e-tron, Audi engineers are researching e-tron power concepts tailored to different vehicle types and driving needs including full battery-electric, plug-in hybrid and extended range electric versions.

Audi plans to launch a variety of electric, as well as hybrid and plug-in hybrid, models over the coming years. They likely include an electric or hybrid sports car, as well as an all-electric version of the Audi A1.[wzslider height=”400″ lightbox=”true”]