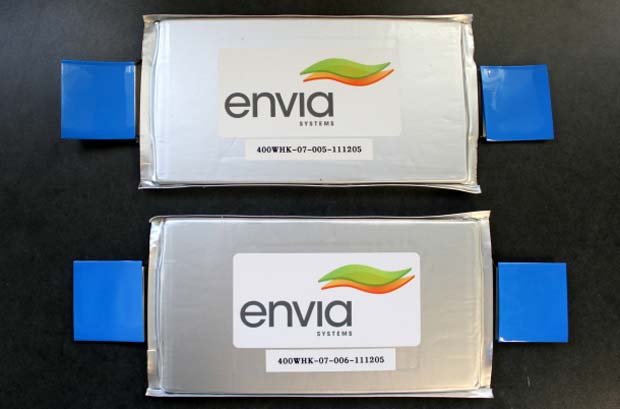 When commercialized, this 400 Wh/kg battery is expected to slash the price of a 300 mile range electric car by cutting the cost of the battery pack by more than 50 percent.

Envia said its batteries were tested at 400 watt-hours per kilogram at a projected cost of $125 per kilowatt-hour, which is more energy dense than most batteries and less than half of what automakers are paying today, according to the company.

The testing of Envia’s next-generation lithium-ion battery was performed by the Electrochemical Power Systems Department at the Naval Surface Warfare Center (NSWC) in Crane, Ind., under the sponsorship of ARPA-E.

Tests at various cycling rates at NSWC confirmed that Envia’s automotive battery cell demonstrated energy density between 378-418 Wh/kg for rates between C/3 to C/10 for a 45 Amp-hour (C/3) cell. Similar cells have been cycling in Envia’s test labs for over 300 cycles.

Envia is at a prototype phase and foresees it taking at least three years before commercial production.

Envia Systems is a Silicon Valley startup founded in 2007, headquartered in Newark CA, and with a prototyping and manufacturing plant in Jiaxing China.

General Motors is one of Envia’s high profile investors, and invested $7 million into Envia about a year ago. GM has said that Envia will provide battery technology for future generations of GM’s Volt plug-in hybrid. Other investors in Envia include Japanese giant Asahi Kasei, Pangaea Ventures, and Redpoint Ventures.