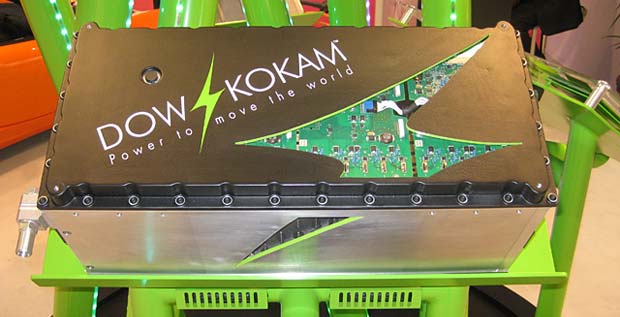 Made with nickel metal cobalt technology, Dow Kokam battery cells are designed with a patented Z-fold process and currently feature an energy density of 14 Wh/kg, a good energy/power balance (14 kW peak power), and offer a cycle life of 2,000 cycles at 80% discharge. Dow Kokam says that the design of the cells results in lower impedance and heat generation, with improved lifetime and faster charge and discharge.

Dow Kokam’s large format batteries bring the reliability of more than 10 years of performance in demanding applications with system integration capabilities that have been proven in more than 1 million kilometers of rigorous, on-the-road testing. Dow Kokam technology has been adopted as the primary source of energy for high performance equipment in industries ranging from transportation, marine, aerospace, defense and high-end industrial products.

Motiv Power Systems, an electric drive power control system provider, with funding from the California Energy Commission, is using Dow Kokam’s advanced battery system to convert a Class 4, Ford E-450 diesel chassis to a completely electric system for a passenger shuttle bus.  The fully-electric, 20-passenger shuttle bus has a 100 mile range, and will operate daily in the San Francisco region.

The shuttle bus will be operated by Bauer Transportation to provide daily service for the San Francisco region, including the Google and Facebook headquarters in the high-tech corridor of the Silicon Valley. The vehicle is projected to operate for at least 8 years, and will begin its deployment in August.

Over eight years, the adaptation of the fully electric bus is expected to save 40,000 gallons of diesel fuel and reduce greenhouse gas emissions by 435 tons.

ZeroTruck, a developer and producer of commercial electric trucks, is using Dow Kokam’s large-format lithium-ion battery systems to power fully-electric, Class 3-6 work vehicles based on the Isuzu N series chassis – a flexible medium duty truck platform.  The ZeroTruck is available in Class 3-6 chassis and can operate at full highway speeds, with a 70 mile range in city driving and superior torque compared to conventional vehicles.

Dow Kokam was established in 2009 to develop and manufacture advanced energy storage technologies for the transportation and other industries. The company is owned by The Dow Chemical Company, TK Advanced Battery LLC and Groupe Industriel Marcel Dassault.