The smart fortwo electric drive has made its debut in the United States. smart USA Distributor LLC, a subsidiary of Penske Automotive Group, Inc. is launching a program this fall that will place electric smart vehicles with like-minded partners in select regions of the country.

When conceiving the smart concept more than 20 years ago, Daimler developers anticipated the need for an alternative powertrain and factored the integration of electric drive components into the first smart concept. In integrating the components and battery for an electric drivetrain, designers did not make sacrifices to the smart fortwo’s safety, agility, comfort and space resulting in a electric smart fortwo that looks just like its combustion engine counterpart with the same exterior footprint and large amount of interior head and legroom that have come to define smart. 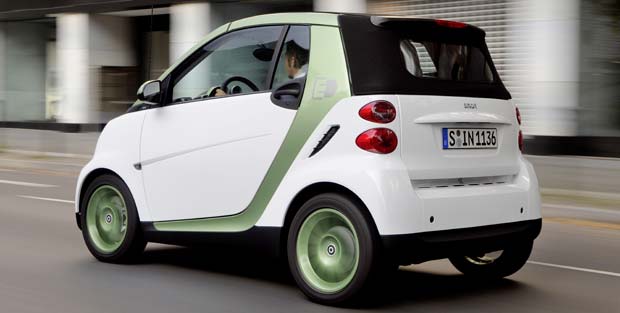 smart USA will begin deploying a fleet of 250 electric drive vehicles across the United States this fall, targeting key electrification leadership cities and Department of Energy grant areas. smart USA is targeting companies, municipalities, organizations and individuals interested in making a passionate statement on conservation and environmental awareness. Partners for vehicle placements will be announced later this year, and series production for consumer sales in smart center dealerships will begin in 2012 with the 2013 model year.

The United States’ fleet of 250 electric drive vehicles will begin arriving in October 2010 and are the second phase of a three-phase program. Phase one started with the placement of 100 electric drive units in London in 2007. Phase two is producing 1,500 cars for cities in Europe, the United States and Canada as well as selected markets in Asia, and first deliveries started in Germany late last year. Phase three will be series volume production starting in the 2012 model year.

The phase-two smart fortwo electric drive vehicles arriving in the United States this year are full electric vehicles, powered by 30 kW drive motor and 16.5 kWh lithium-ion battery. Using a standard 220V outlet, it takes only three and a half hours to charge the battery from 20 to 80 percent of its capacity and less than eight hours to fully charge it. The battery can also be charged using a common household 110V outlet. The vehicles can reach highway speeds and offer a range of 82 miles on a single charge.

The U.S. pilot program will provide third generation technology developers with performance experience in the breadth of different geographies and climates that make up the continental United States. The information gathered in the phase-two vehicle research will establish the performance, range capability and recharging time of the series production vehicles with third generation technology.

Ecology is a hallmark of smart fortwo, from the environmentally friendly manufacturing process in Hambach, France, to the recyclability of 95 percent of the vehicle’s parts. Additionally, the vehicle’s diminutive size translates to less material consumption in its production and a practical vehicle concept for low cost commuting and other urban travel.[wzslider height=”400″ lightbox=”true”]