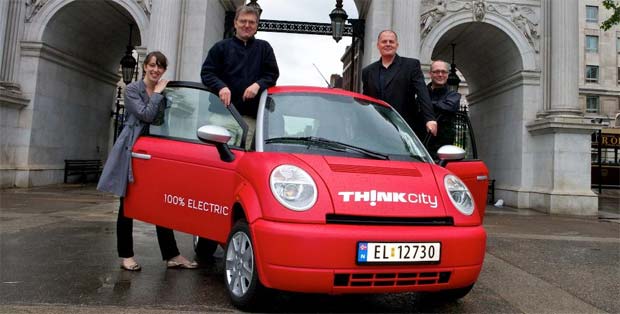 The BBC has embarked on a 4000 miles trip around Europe called BBC Electric Ride with THINK City EV to find out whether electric cars are a viable form of future transport.

The team of four, led by presenter Peter Curran, will drive straight to Harwich to catch a ferry to Denmark; before driving across the Danish islands to Norway, then onto Sweden, Austria, Germany, Lichtenstein, Switzerland, France, Italy, Spain, Portugal and others along the way before returning to London early in July.

THINK handed the vehicle over to the BBC Electric Ride team in London this week, and gave a top EV driving tips master-class to lead-driver Peter Curran, to help make the most of the vehicle and maximize battery range on the epic journey ahead. Some of the top tips included:

* The intensity of lithium ion batteries and range use is primarily governed by the throttle, so use it wisely and watch the efficiency meter on the dash to feel for your optimum driving style, e.g. by releasing the throttle early when approaching a red traffic signal.

* Drive with the windows up to minimize drag

Kevin Dawson, senior producer of the show, commented: “We want to look at the emergence of electric cars as a dawning reality. We’ll be investigating the technology, infrastructure and political will behind the growth of EV culture.”

Richard Canny, THINK CEO, added: “This is exactly the pioneering spirit that we encourage at THINK, which is why we are so happy to be supporting the BBC in this excellent project. They will prove that an EV can be just as versatile as a conventional car, but at the same time much more cost effective, efficient and friendly to the environment. Our top EV driving tips will help them along the way, and I look forward to personally welcoming the team in Oslo next week – a quarter of the way through their expedition.”

BBC Electric Ride will be broadcast on Radio 4 on Saturdays at 1030hrs (BST / GMT +1) for four weeks from 19 June and will also be available globally on BBC i-player from the same date.

The team can also be followed globally on BBC Online, Facebook, Twitter and the project website.[wzslider height=”400″ lightbox=”true”]