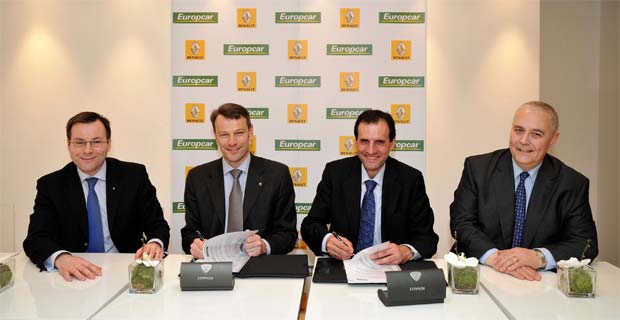 Europcar rental agency has pre-ordered 500 Renault electric cars and said they will be delivered to fleets in Europe’s largest cities sometime in third quarter of 2011.

The announcement came after two companies signed the Memorandum of Understanding on electric vehicles at the Frankfurt International Motor Show last September.

Europcar, Renault’s principal short-term rental partner in Europe, has given substance to the partnership agreement signed with Renault at the recent Frankfurt Motor Show to promote zero-emission mobility solutions.

Through a roll-out targeting its rental outlets in Europe’s largest cities, Europcar is set to offer its customers the new Renault Zero-Emission (Z.E.) range from 2011 in the European short-term rental market.

With electric cars, which produce zero emissions during use, Renault is preparing a breakthrough solution that provides sustainable mobility for all.  The four show-cars displayed at the Frankfurt Motor Show – Twizy Z.E. Concept, Zoë Z.E. Concept, Fluence Z.E. Concept and Kangoo Z.E. Concept – preview the electric vehicle range that will be launched in 2011 with three models:

They will be followed in 2012 by Zoë Z.E. – a compact 4-meter 5-seater supermini.  After 2012, the Z.E. range will continue to expand into all segments to meet the needs of a diverse range of customers.