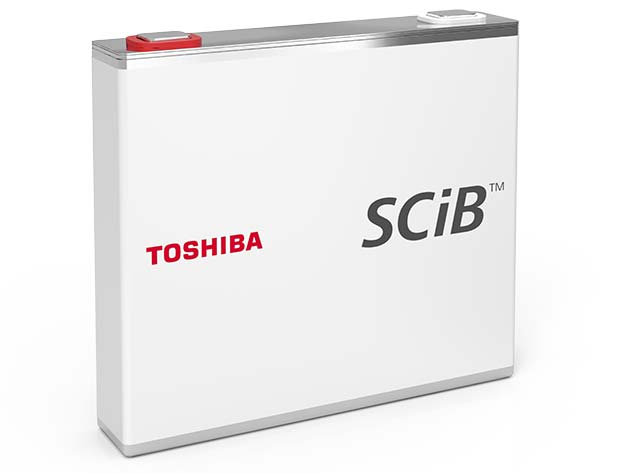 Toshiba Corporation today expanded its SCiB product offering with the launch of an innovative 20Ah-HP rechargeable lithium-ion battery cell that delivers high energy and high power at the same time.

The market wants batteries that deliver both high-energy and high-power characteristics, but until now this has required a trade-off for rechargeable lithium-ion batteries. In an EV, for example, a high-energy battery allows the vehicle to drive further on a single charge—but it lowers power input and output and extends charge times. Toshiba drew on its know-how in current high-energy and high-power products to develop a new cell that successfully combines the advantages of both.

The cell is ideal for heavy-load applications where high power input and output are essential, and for situations where battery cells must suppress heat and operate continuously, such as rapid charging of commercial vehicles, regenerative power systems for rolling stock, and industrial equipment. The cell is the same size as Toshiba’s current 20Ah product, allowing current customers to easily upgrade to the improved input and output power with the same module pack. The cell is now available to order worldwide.

1. Excellent heat suppression
Compared to Toshiba’s current 20Ah cell, the new 20Ah-HP cell delivers 1.7x higher input and 1.6x higher output, realized by an approximately 40% reduction of resistance in the cell. This improvement efficiently suppresses heat generation when a large current is applied, allowing design of a simpler cooling system. For example, depending on the customer’s system, water cooling can be simplified to forced air cooling, and forced air cooling simplified to natural cooling. The lowered resistance also reduces overvoltage, allowing the cell to function in a wider range of state-of-charge (SOC).

2. Long life
The new 20Ah-HP cell achieves a longer life than the current 20Ah cell by suppressing heat during continuous charging and discharging, due to its lower internal resistance. Under the test conditions shown in figure 1, the cell maintained almost 100% capacity after 8,000 charge/discharge cycles, while the capacity of the current 20Ah cell decreased by approximately 10%.

3. Compatibility
The new 20Ah-HP cell delivers improved input and output power but maintains the same size as the current 20Ah cell, allowing current customers to easily upgrade to the improved performance with the same module pack.