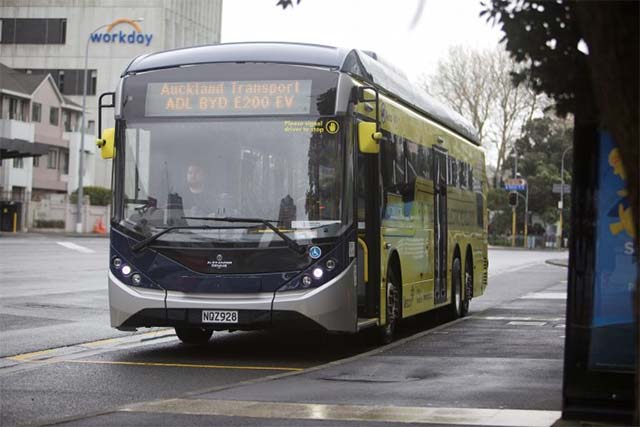 To meet the requirements of local transport authorities and operators, the Enviro200EV XLB is a new step in the evolution of the successful combination of BYD’s battery technology and ADL’s expertise in tailoring buses. This 41-foot-long electric bus has three axles and provides a total passenger capacity of 78 ensuring operational flexibility. Additionally, 36 passengers can be seated, and two wheelchair spaces are provided which are accessed via a manual ramp at the front door.

ADL’s General Manager in New Zealand, Tony Moore, said: “The launch of our extra-large electric bus marks an exciting new chapter in our partnership with Auckland Transport. After bringing the first electric buses to the city in 2018, we now have a zero-emission bus that is fully designed to New Zealand requirements – and is made locally, boosting the economy and supporting skilled jobs.”

Auckland Transport Metro Decarbonisation Manager, Darek Koper said: “This trial fleet provides a range of options for New Zealand bus operators and it will build operator confidence in new technology. It will also allow them to understand operational requirements and costs to inform future procurement decisions, while supporting the accelerated transition to zero-emission buses in Auckland.”

The launch vehicle has been wrapped in an advertisement for energy supplier Mercury Energy, which will support the trial of the electric bus.

“We have delivered a lot of BYD/ADL electric buses to several cities in New Zealand together with ADL,” said Wing You, BYD’s General Manager for Australia and New Zealand. “This is a great privilege for BYD to work together with local manufacturers to help the local government speed up the transition to zero-emission electric buses by 2035, and so far we have completed over 600,000 miles in operation, helping to cut more than 1,000 tons of CO2 emissions.”

At present, BYD is successfully serving markets in many other countries across the Asia-Pacific, including Japan, Korea, Singapore, Australia, India, etc. Globally, the brand’s pure electric vehicles cover over 300 cities, operating in more than 50 countries and regions.