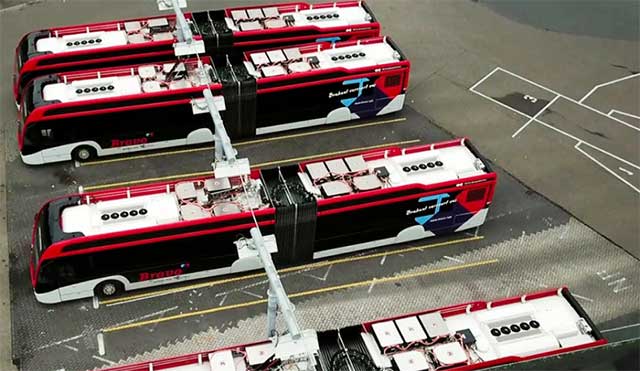 Urban buses are the first transport mode where electrification is having a significant impact today. This trend is driven primarily by the rising awareness of toxic air pollution in our cities from internal combustion engines and supported by the compelling economic, comfort, and noise advantages.

In 2017, the number of electric bus orders more than doubled (from 400 in 2016 to more than 1,000); the next years are projected to follow the same tendency as manufacturers scale up production and their offerings.  In 2018, the market share is estimated to be around 9%, marking the transition from niche to mainstream and the beginning of a steep and necessary uptake curve.

That’s according to a new analysis of urban buses by T&E focusing on orders received by bus-makers and the total cost of ownership of different bus types.

More than 95% of the urban area in the EU is affected by air pollution with much of it caused by diesel fumes. Diesel buses impose heavy costs on society and the climate through air pollution, noise and greenhouse gas (GHG) emissions. Cleaning up the bus fleet, which is almost all diesel today, can contribute significantly to lessen the air pollution crisis in European cities.

Electric and diesel buses are already at parity in terms of total cost of ownership (TCO) when the health costs imposed by air and noise pollution are included. Add climate costs, and electric buses have today a lower TCO than diesel buses.

Lucien Mathieu, transport and e-mobility analyst at T&E, said: “Electric buses are the superior choice in every respect now. They have no tailpipe emissions, they’re quiet, comfortable and economical. If mayors and regions are serious about tackling the air quality and climate crises, the only rational decision is to buy electric buses from now on.”

According to the analysis there are two key barriers to the electrification of buses in Europe. First challenge is the higher upfront cost (up to twice the price of a diesel bus), which makes it difficult to buy electric buses without some financial help, in particular for less wealthy cities which are usually the ones with the worst air quality. The second barrier is the lack of strong policy support that stimulates both supply and demand, thereby increasing economies of scale, and pushing down the cost of zero-emission buses.

The environment committee of the European Parliament has adopted a much better approach, backing a sales target requiring busmakers to sell 50% zero emission urban buses by 2025, and 75% by 2030.

Lucien Mathieu concluded: “For cities struggling with the higher capital cost of zero-emission buses, a grant could be made available through the new EU budget from 2020. To further drive down the purchase price of e-buses, we need a Europe-wide zero emission sales target for new buses. That’s why we urge the full parliament to support the zero emission bus proposals when it votes on new standards for trucks and buses next week.