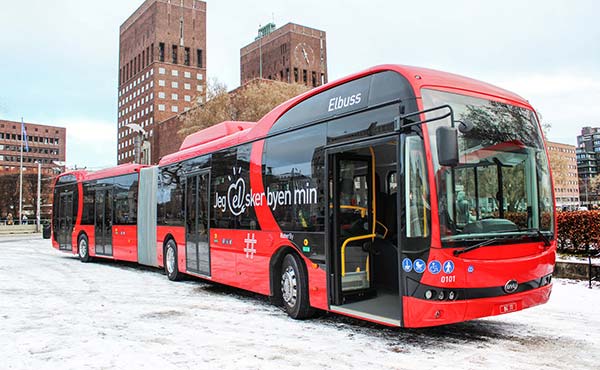 Nobina is the first operator in Europe to put the Chinese produced BYD articulated electric bus into operation. Two 18-metre buses are running on route 31 and 31E, Norway’s heaviest duty routes carrying approximately 15 million customers a year and approximately 50,000 daily travellers. The routes are operated by Nobina on behalf of Ruter (PTA).

“We look forward to gaining valuable experience with these climate-friendly and quiet buses. Line 31 is the first route to try such a concept in Norway. In Nobina, we are very pleased to be able to help drive the switch to green buses in Oslo in cooperation with Ruter. This is an innovative contribution to our service in Oslo”, says managing director of Nobina, Jan Volsdal.

Other electric buses are on trial in Norway but, unlike them, the BYD articulated ebuses do not use opportunity charging via pantographs and street facilities, but charge at the depot.

The articulated ebuses running on Line 31 and Line 31E operate between Grorud and Tonsenhagen, a distance of 17 to 24 km.

“We showed off our articulated ebus concept more than two years ago and we are delighted to see it enter passenger-carrying service”, said Isbrand Ho, Managing Director of BYD Europe. “Conditions in Oslo are challenging for electric vehicles but we have every confidence that our ebuses will perform well in this heavily trafficked route even in the deep cold of the Norwegian winter”.