Series production of BMW iX gets underway at Dingolfing Plant 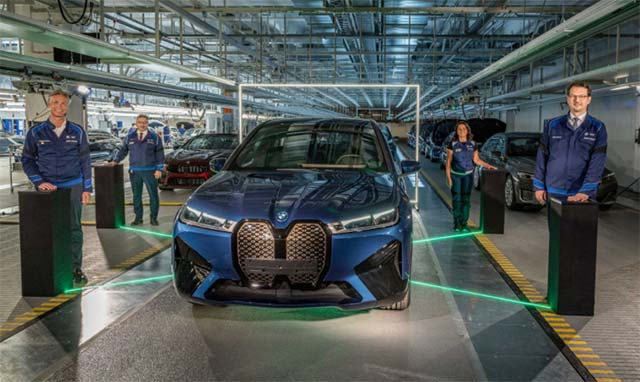 The BMW iX is being manufactured at the BMW Group’s largest European production plant on an assembly line with the flexibility to build a mix of BMW 5 Series, 7 Series and 8 Series models. To handle this flexibility and variety of drive trains, vehicle assembly in Dingolfing has been expanded and refurbished. The BMW Group has invested a total of more than 400 million euros in producing the BMW iX at the Dingolfing vehicle plant. Many of the remodelling and structural measures required for the BMW iX are already benefiting future generations of the BMW 7 Series and 5 Series that will come off the production line in Dingolfing in the coming years. Fully-electric variants have also been announced for both model ranges.

With the BMW iX and other PHEV models at Plant Dingolfing alone, the BMW Group plans to double the percentage of electrified vehicles produced this year compared to 2020. By the middle of the decade, half the vehicles produced in Dingolfing will be electrified. The new model will play an important part in this. The BMW iX will already be one of the highest-volume models at the location by next year. The BMW iX will be followed in the autumn by the BMW i4, which will be built in Munich. At the end of next year, all German plants will be producing at least one fully-electric vehicle.

Production of the BMW iX in Dingolfing benefits from broad know-how and expertise in the technologies located at the site. Close interaction between these different areas enables a high level of in-house activity and short lines of communication, as well as ensuring optimum production technology overall. The fully-electric heart of the BMW iX – the highly integrated e-drive and fifth-generation battery, as well as the complete electric axle are produced on site, together with the Dingolfing component plants. Production capacity will be systematically expanded and, from 2022, Dingolfing will be able to produce e-drives for more than half a million electrified vehicles.

The BMW iX introduces a multitude of innovations to the product and production processes at the plant – especially in the vehicle’s electrical system architecture, software, digital services, connectivity and automated driving functions. As a result, the vehicle plays an important role as a trailblazer and is making Dingolfing “e-car” and “smart-car ready” as the BMW Group’s primary plant for the luxury class.

The BMW iX is also an important trailblazer in production, bringing future technologies into the production system – such as digital methods for employee training, automation of logistics processes, virtual commissioning and validation of driver assistance systems.

The topic of sustainability is firmly anchored throughout the company. A particular focus is on improving our carbon footprint – especially in production of electric vehicles. Independent auditors have confirmed that the greenhouse gas potential of the BMW iX xDrive40 is around 45 percent lower than that of a comparable Sports Activity Vehicle with an internal combustion engine. The BMW Group takes a holistic approach to reducing CO2 emissions and minimising resource consumption that covers the entire value chain, including production as well as the supply chain and use phase.

The BMW Group has already succeeded in lowering resource consumption per vehicle produced by more than half between 2006 and 2020. CO2 emissions have been reduced even more significantly – by as much as 78 percent. The aim is to reduce CO2 emissions per vehicle produced by another 80 percent by 2030. To achieve this, BMW has made some changes at Plant Dingolfing and implemented a series of new measures. For example, the BMW iX is produced exclusively using regional and directly sourced green power from two hydroelectric power plants located on the Isar and Lech rivers. The entire plant, like all BMW Group locations, will also be net carbon neutral from this year, through the use of corresponding offsets and certificates.

Other aspects of sustainability range from energy-efficient installations to packaging planning, through transport logistics and recycling, up to and including topics such as biodiversity and water management. Plant Dingolfing is therefore able to achieve a recycling rate of more than 90 percent and an even higher recoverability rate of over 99 percent. The plant’s own wells meet over 40 percent of its water needs, thereby helping conserve the region’s drinking water reserves. The BMW Group has already reduced its water consumption by more than 30 percent overall since 2006.

BMW iX as catalyst for change: Active shift in competence

The BMW iX creates a need for additional training beyond the extensive experience and expertise that is already available. It is accelerating the shift in competence already taking place within the production network and helping prepare the workforce for the demands of a new era. In this way, employee development across the entire company is being geared towards digitalisation and e-mobility. As part of the biggest training offensive in the company’s history, 75,000 staff are being trained in future areas of activity.

In Dingolfing alone, more than 4,000 employees have moved to jobs with strong future prospects since 2012. A current example of this is the creation and expansion of the Competence Centre for E-Drive Production at the location, which doubled its staff numbers last year from 600 to 1,200. This number is likely to increase to over 1,900 by the end of the year.