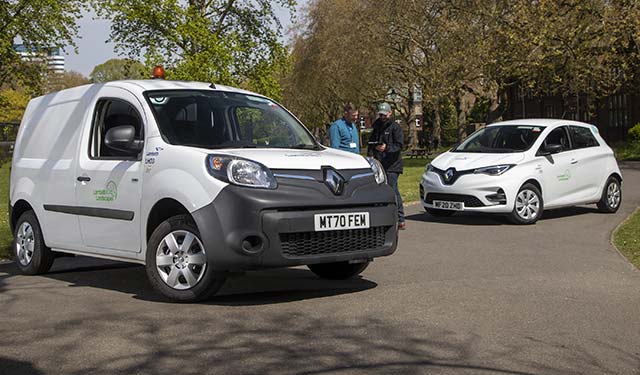 Renault electric vehicles are helping Lambeth Council to lead by example in its drive to improve air quality in what has traditionally been one of the most polluted areas in London and to become a carbon-neutral council by 2030.

The Council has taken delivery of six 100 per cent electric Renault Kangoo E-Tech vans, which contribute to its ongoing goal of electrifying 30 per cent of its hardworking landscapes division fleet. The new zero tailpipe-emissions-in-use Renault Kangoo E-Tech vans are the first to be purchased by the Council and complement an all-electric Renault Zoe E-Tech car, which was introduced into the fleet last year for use by the landscapes department’s tree inspector.

The Renault Kangoo E-Tech vans, as with the Zoe E-Tech previously, all replace similarly sized diesel vehicles from another manufacturer. They are the first pure-electric Renault vans to be added to the landscape’s division fleet.

The all-electric Kangoo E-Tech vans will be used by the landscape division’s housing supervisors and mobile fitters for daily visits to council works across Lambeth’s 10.36 square miles. As well as helping to lower noise and air pollution across the borough, the vans provide Lambeth Council’s personnel with a more relaxing and convenient driving experience, the fully automatic transmission and instant torque being a welcome benefit in negotiating the often heavily congested inner London area.

As well as enabling Lambeth Council to help achieve its ambitions for a low-emission fleet, as outlined in its five-year Air Quality Action Plan, it chose the Kangoo E-Tech after an initial trial highlighted it to have sufficient range and size for the demands of the operational role. Compared to its previous diesel vans, and in addition to significant fuel savings, Lambeth Council will also benefit from lower servicing costs, less downtime for maintenance and exemption from any congestion charges.

Lambeth Council will charge its new all-electric Renault vans via 13 new 7kW smart chargers that it has installed across its five maintence depots located throughout the borough, including at its main site in Archbishops Park.

The Renault Kangoo E-Tech can be specified in three body styles (Panel Van, Maxi Panel Van, and Crew Van) and two trim lines – Business and Business+. The Business+ specification includes such features as electrically operated and folding door mirrors, one-touch driver’s electric window, body coloured bumpers, metallic paint, and rear parking sensors. Depending on the model, it offers a load area of up to 4.6 cubic metres.

Renault PRO+ now offers the widest range of all-electric commercial vehicles of any manufacturer. In addition to the Renault Master E-Tech and Renault Kangoo E-Tech, it also encompasses the Zoe Van E-Tech, which combines the equipment and 245-mile range of the passenger car version with a versatile payload of 457kg (Business trim). The Zoe Van E-Tech comes with a five-year/100,000-mile warranty and an eight-year/100,000-mile battery guarantee, while the other vans come with the reassurance of a standard three-year/100,000-mile warranty, with a battery guarantee of five years/60,000 miles.

Until the end of June however, the Kangoo E-Tech is available with the complimentary 5-Year PRO+ Promise, which includes a five-year/100,000-mile warranty, five years’ roadside assistance and a five-year service plan.

Jun 6, 2021Blagojce Krivevski
Nissan Ariya available to pre-order in JapanAlmost Every Fourth New Volvo Globally Was A Plug-In In May 2021