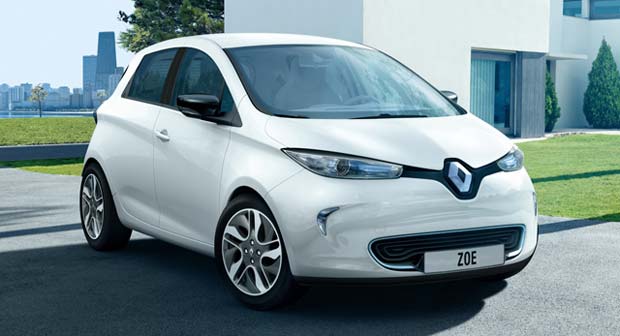 The production version of the Renault ZOE electric car has been unveiled today at the 2012 Geneva Motor Show.

The Renault ZOE electric hatchback will go on sale in Europe this autumn, but cars can already be reserved at www.renault-ze.com.

Tax-paid battery lease prices will start from €79/month (for a contract covering 12,500km/year over a period of 36 months).

– Renault ZOE is the first mass-market electric car with pre-tax prices in France starting from €15,700, the cheapest EV on the market.

– Renault ZOE is the first mass-market electric car with a range of 210km (130 miles) in NEDC cycle.

– Renault ZOE is the first vehicle to be equipped with Range OptimiZEr, a system designed to optimize real-world range whatever the conditions thanks to three innovations: new-generation braking energy recovery, a heat pump and energy efficient Michelin Energy E-V tyres. For example, on a journey near and around a built-up area, drivers stand to benefit from a real-world range of 100km (60 miles) in cold conditions and 150km (93 miles) in mild weather.

– Renault ZOE is the first electric car capable of being charged at any power level up to 43kW – in between 30 minutes and nine hours – thanks to its integrated Chameleon charger. ZOE’s battery can be charged in approximately one hour at 22kW fast-charge stations which are technicaly simpler and more economical than current fast-charge stations. This intermediate power level ensures longer battery life and has less impact on the grid than a 43kW charging station.

– Renault ZOE is the first electric car to permit the widespread deployment of fast-charging stations that are easier to use and up to four times cheaper.

– Renault ZOE is the first Renault vehicle to feature Renault R-Link, an integrated, connected multimedia system.[wzslider height=”400″ lightbox=”true”]ZOE LIFE
The ‘Life’ version of Renault ZOE boasts all the necessary technology to ensure simple use, long range and connectivity.  Equipment includes:
•    The Range OptimiZEr system.
•    The Chameleon battery charger.
•    Renault R-Link. This seven-inch touchscreen display with speech recognition enables the car’s functions to be controlled without drivers having to take their eyes off the road. Functions covered include Carminat TomTom® Live navigation, electric car driving guidance, the audio system, R-Link Store applications and much, much more.
•    The My Z.E. Connect Pack for remote access to range-related data using a smartphone or computer.
•    “Z.E. Voice”, an exterior sound which warns pedestrians of the vehicle’s approach. One of three sounds can be selected: Pure, Glam and Sport.
•    The Eco-mode which optimises range by adjusting the performance of the climate control system and the power provided by the motor. This reassuring function is activated by a switch on the centre console.
•    Plus a range of other comfort-enhancing equipment, including automatic climate control and pre-conditioning of the cabin.

ZOE ZEN
In addition to its brightly lit cabin, ZOE Zen benefits from the ‘Take Care by Renault’ signature which is dedicated to looking after the wellbeing and comfort of all occupants. The system compris
•    A relaxing or stimulating active scent diffuser. The effectiveness of the scents has been proven by a study conducted by the German institute Psyrecon.
•    A purifying and relaxing air ioniser. The purifying function eliminates the bacteria found in cabin air. The relaxing function generates negative ions to produce a balance with the positive ions, which are present in high concentrations in confined spaces.
•    A toxicity sensor which detects excessive pollution levels and automatically switches on the air recycling mode in the cabin.
•    Teflon® upholstery protection for easier cleaning. This invisible, odourless treatment is both waterproof and stain-proof.

Both the ZEN and INTENS versions are equipped with:
•    ‘3D Sound by Arkamys’ auditorium quality audio which occupants will particularly enjoy thanks to ZOE’s silent ride.
•    A hands-free card.
•    16-inch Aérotronic aluminium alloy wheels, the aerodynamic design of which resembles a ship’s propeller.
•    The My Z.E. [email protected] Pack to programme, start or terminate battery charging remotely or pre-condition the cabin using a smartphone or computer.
•    A Digital Pack to access R-Link Store applications.