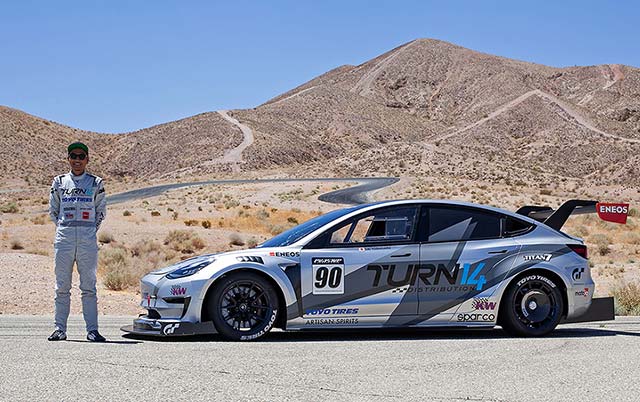 This in itself is a big story since the same combination won the Unlimited Class at the 2020 event, but what makes it more remarkable is that the team has put aside its proven 900-horsepower turbocharged Toyota 86 and is building a Tesla Model 3 from scratch for the new attempt.

Initially, the connection between a Japanese oil company and a US-built electric race car might not be immediately apparent, but it’s an indication of the major changes electric vehicles are bringing to the automotive industry.

For ENEOS, its involvement with the Turn 14 Distribution / Toyo Tires / ENEOS / Evasive Motorsports Tesla Model 3 Pikes Peak race car is an opportunity to prove and promote its new EV Fluid Series. The line of six dedicated EV fluids (listed below) has been developed by the same engineers and chemists who work alongside the majority of leading car makers in Japan and Asia. Currently, ENEOS engineers and chemists are working closely with many vehicle manufacturers to create the latest lubricants, continuously improving vehicle efficiency through reduced friction, lower emissions, improved fuel consumption and greater longevity. And as the future of automotive development looks towards electric vehicles, ENEOS also tasked its development teams to look at alternative fuel vehicle concepts, particularly in terms of lubrication and cooling. The new ENEOS EV Fluid Series is now being offered to existing OEM (Original Equipment Manufacturer) partners and the rest of the world’s EV manufacturers to help improve vehicle efficiency.

With a stroke of serendipity, Evasive Motorsports in Cerritos, CA also foresaw electric vehicles becoming a major factor in their future and took the major decision to purchase a used Tesla Model 3 and transform it into a challenger for the annual Pikes Peak International Hill Climb (PPIHC). As one of the world’s most grueling motorsports festivals for both the driver and the car, the 12.42-mile “Race to the Clouds” climbs 4724 feet from start to finish The sustained demand of the high-speed course will put tremendous strain on any vehicle’s components, but particularly the Tesla battery packs, which must remain cool to maintain maximum power for the duration of the 156-turn course.

As with all vehicle technology, one of the best ways to prove its credentials is to drop it into the cauldron of competition. And so the Turn 14 Distribution / Toyo Tires / ENEOS / Evasive Motorsports Tesla Model 3 Pikes Peak race car will become a partner in the development of the new ENEOS EV Fluid Series. 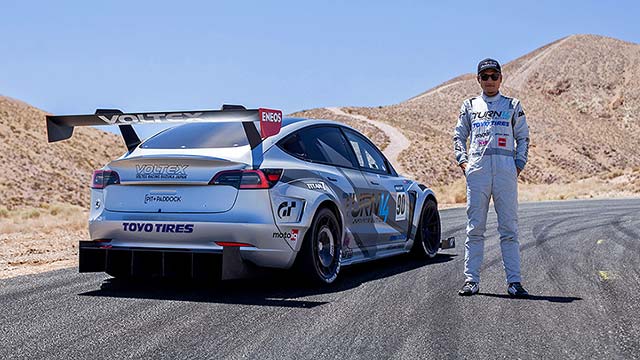 With six previous PPIHC attempts under its belt, Evasive Motorsports (EVS) is supremely experienced but the Tesla’s preparation is particularly challenging because very few motorsports components exist, requiring a great deal of extra effort in terms of problem solving and fabrication.

One of the team’s priorities has been to ensure the powertrain has sufficient cooling. Evasive worked with CSF Radiators to create a new radiator and oil cooler set up. As an extra precaution, a nitrous oxide sprayer was installed, helping to chill the batteries during the hill climb if pre-set temperatures are exceeded. Airflow to the battery pack has been further improved with a carbon fiber front vent, venting in the new carbon fiber hood, and rear inlet ducts integrated into the C-pillars.

Developing 450 horsepower, the stock Tesla Model 3 Performance accelerates 0-60mph in 3.1sec to a top speed of 162mph. The Evasive team needs to harness its all-wheel drive performance in order to create a new EV Production Car track record time in the Exhibition Class (because no EV competition class currently exists). As such, the car has further modifications, including widebody fenders and carbon fiber aero pieces from Artisan Spirits in Japan. The primary purpose is to accommodate 18×11” Titan 7 TP-5 forged wheels and 305/650-18 Toyo Tires racing slicks. This combination, in harmony with KW Competition suspension and Brembo racing brakes, should ensure Dai Yoshihara has the best chassis to command the 156 turns on his way up to the finish line.

Another major addition is the Quaife ATB rear differential, which will better apportion power to the rear wheels. However, its installation was far from simple, requiring a modified frame and custom bushings. As with previous PPIHC attempts, the diff is lubricated by ENEOS gear oil to ensure efficiency and durability.

The final piece of the puzzle is the nut behind the wheel. And for 2021, driving duties will again be performed by Dai Yoshihara. As the 2011 Formula DRIFT driver’s champion, multiple Time Attack race winner, GT sports car driver and racing instructor, he will be protected by an FIA-spec EVS rollcage while sat in his carbon/Kevlar Sparco QRT-K bucket seat with six-point harnesses. For his third attempt at PPIHC, Dai will monitor speed and vehicle parameters via a Motec C127 Datalogger display in a custom carbon fiber EVS dashboard.

With the conversion to a race car recently completed, its test program continued until the team headed out to the “Race to the Clouds,” which takes place on June 27 in Colorado. Everybody at Evasive Motorsports is determined to be fully prepared for when the Turn 14 Distribution / Toyo Tires / ENEOS / Evasive Motorsports Tesla Model 3 Pikes Peak pulls up to the start line.

For ENEOS, its EV development program will not stop when the flag drops at Pikes Peak. It will continue to work with many of the world’s largest car makers to help solve their lubrication and EV fluid requirements in the pursuit of greater efficiency.