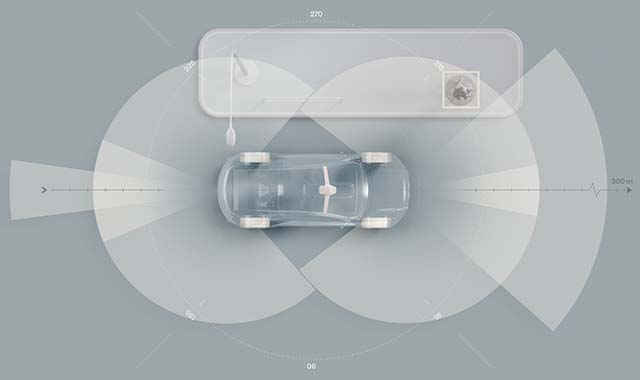 Volvo Cars’ forthcoming fully electric flagship SUV will have industry-leading safety technology as standard, helping to save even more lives as the company sets a new benchmark for automotive safety.

The fully electric successor to Volvo Cars’ XC90, to be revealed in 2022, will come with state-of-the-art sensors, including LiDAR technology developed by Luminar and an autonomous driving computer powered by the NVIDIA DRIVE Orin system-on-a-chip, as standard.

By combining this state-of-the-art hardware with Volvo, Zenseact and Luminar software for the next generation of its well-established collision-avoidance technology, Volvo Cars aims to reduce fatalities and accidents as a whole with this new safety package.

“Volvo Cars is, and always has been, a leader in safety. It will now define the next level of car safety,” said Håkan Samuelsson, Chief Executive of Volvo Cars. “By having this hardware as standard, we can continuously improve safety features over the air and introduce advanced autonomous drive systems, reinforcing our leadership in safety.”

With the new safety package, Volvo Cars aims to reduce collisions, and the reduction rate is anticipated to accelerate over time via over-the-air software updates. The new technologies are also designed to specifically address those traffic situations which result in a large portion of the remaining severe injuries and fatalities found today.

“In our ambition to deliver ever safer cars, our long-term aim is to achieve zero collisions and avoid crashes altogether,” said Henrik Green, Chief Technology Officer at Volvo Cars. “As we improve our safety technology continuously through updates over the air, we expect collisions to become increasingly rare and hope to save more lives.”

Once introduced, the technology is expected to mature over time, becoming more capable and allowing the car to assist and improve the capabilities of a human driver in safety-critical situations. Whereas previous generations of technology largely relied on warning the driver for potential immediate threats, this new safety technology will, over time, increasingly intervene as needed to prevent collisions.

Beyond the sensor suite and AI computing performance, Volvo’s forthcoming flagship model will also come with back-up systems for key functions such as steering and braking that make it hardware ready for safe, unsupervised autonomous driving once available.

These back-up systems, alongside LiDAR and the computer software, will enable the Highway Pilot functionality, developed in-house together with Volvo Cars’ autonomous driving software development company, Zenseact. An autonomous driving feature for use on motorways, the optional Highway Pilot will be activated for customers when verified safe and legally allowed for individual geographic locations and conditions.

Earlier this year, Volvo Cars announced it will use NVIDIA technology to centralise computing. The core computer and autonomous drive computer, both powered by NVIDIA technology, allow its cars to become safer, more personal and more sustainable over time through over-the-air updates, while also providing it with the computing power required for vision and LiDAR processing.

The new safety technology illustrates Volvo Cars’ belief in working together with technology leaders such as Luminar, NVIDIA and Zenseact as it strives to deliver the best and safest possible cars to its customers. These and other partnerships provide Volvo Cars with the technology base to be one of the fastest-moving companies in a rapidly transforming industry.

Volvo Cars will reveal more details on its future technology roadmap at the Volvo Cars Tech Moment, to be held on 30 June.