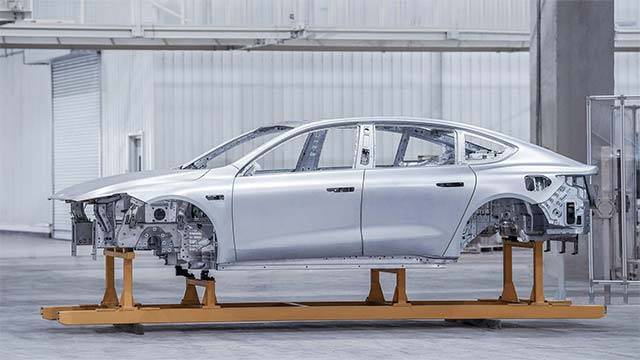 The first NIO ET7 body, with the main structure and cover welding assembly, rolled off the production on April 1 at the JAC-NIO Hefei Advanced Manufacturing Center in China.

NIO’s product portfolio now includes three SUVs, the ES8, ES6 and EC6. With the ET7, NIO’s first flagship sedan and a direct Tesla Model S and XPeng P7 rival, NIO is now entering in an entirely different segment of the market than what the company is currently catering to.

The NIO ET7, which was unveiled at the Nio Day event held earlier this year, is expected make its world debut later this month at the Shanghai auto show.

It will be offered with three battery sizes. The entry level 70kWh unit offers a 310-mile (500 km) range, with a 100kWh version offering 435 miles (700 km). The top model with a ginormous 150kWh battery pack has a claimed range of more than 621 miles (1,000 km). All the figures are calculated using the Chinese NEDC system.

The ET7 will be priced between $69,000 and $81,000 depending on the configuration and whether a user chooses the battery-as-a-service or autonomous-driving-as-a-service offerings.

The car will be available in early 2022.