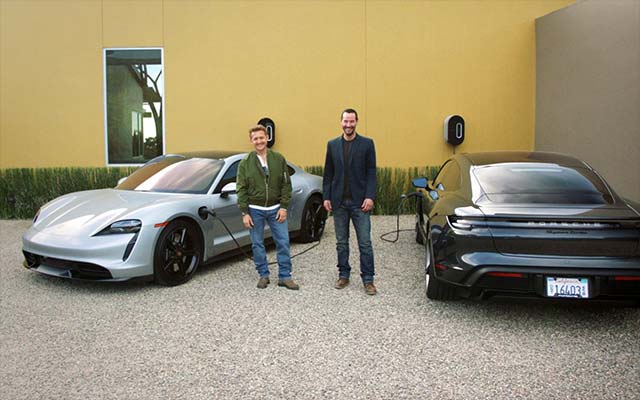 Two cars, two friends, one charge of electricity and one epic drive down the Pacific Coast Highway to the Porsche Experience Center Los Angeles.

Friends and Porsche enthusiasts Keanu Reeves and Alex Winter embark on an epic road trip in southern California that features a test of nerve, skill – and the Porsche Taycan Turbo.

‘Going the Distance’, an eight-minute film about the road trip. In it, the two American Hollywood actors are given challenges by an all-star cast which test both friends to their limits, on closed roads.

Racer and stunt driver Tanner Foust makes a guest appearance for the first stop in the film, giving Reeves and Winter the chance to experience the thrill of Launch Control in a Taycan Turbo. Next, the two accept the subsequent challenge set by Porsche factory driver, Patrick Long: a 3.2-kilometre hill climb up the Pacific Coast Highway following a 918 Spyder. The two complete their day of trials on the Porsche Experience Center Los Angeles track, where they attempt to beat the Taycan’s drift record. The challenges were performed under the supervision of professional drivers on closed courses.

The Taycan Turbo is at the core of the Taycan line up – capable of accelerating from a standstill to 100 km/h in 3.2 seconds with Launch Control, it’s equipped with four-wheel drive and, through its twin electric motors, it has a combined 670 hp. The Taycan is available to be tested on track and to its limits at the worldwide Porsche Experience Centers.