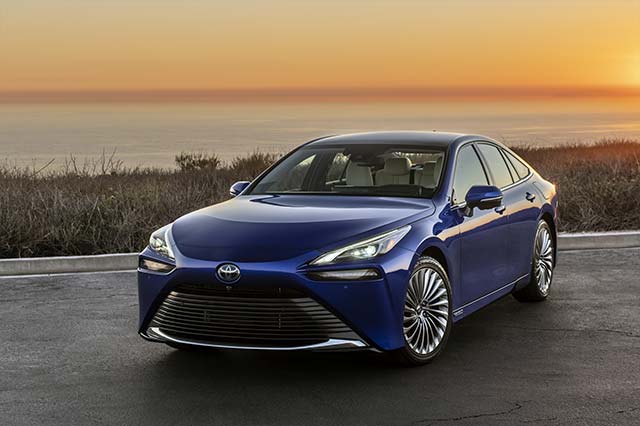 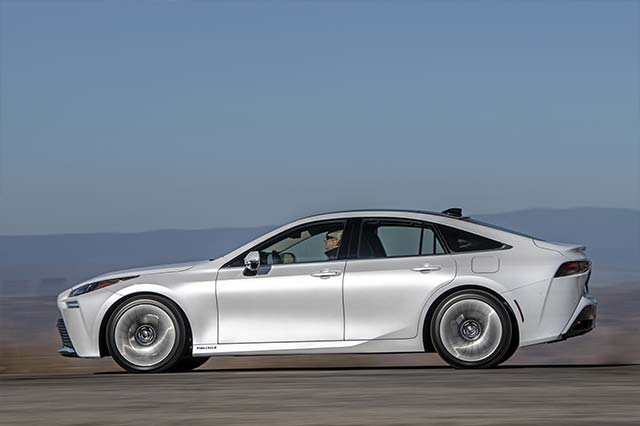 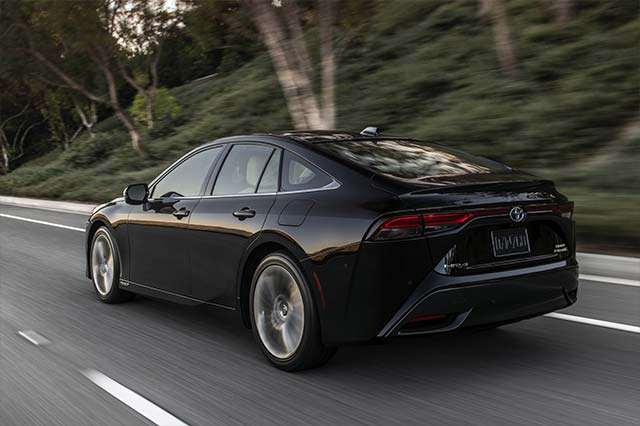 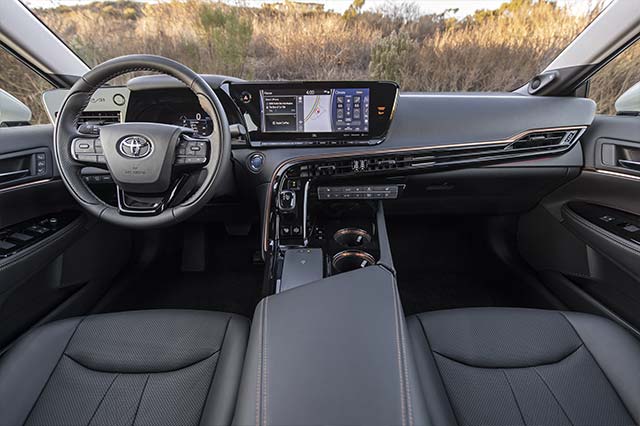 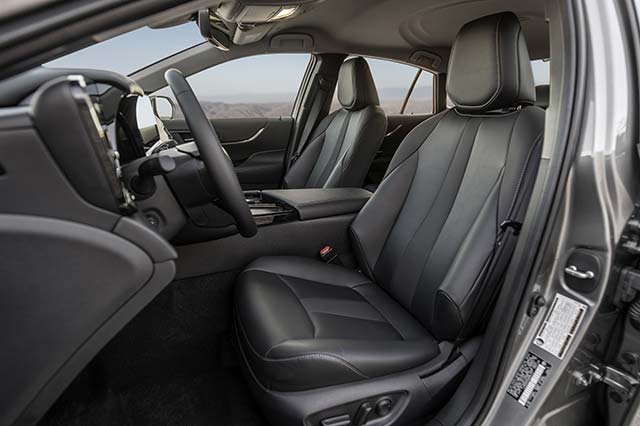 Beauty, technology and a hint of the future come together in Toyota’s new flagship sedan, the all-new 2021 Mirai. The 2016-2020 Mirai was the first production fuel-cell electric vehicle (FCEV) offered for sale to retail customers in North America. Now, for 2021, Toyota has fully rebooted the Mirai as a premium rear-wheel drive sports-luxury FCEV with striking design, cutting-edge technology, more engaging driving performance and a significantly longer EPA-estimated range rating.

The model name, which means future in Japanese, is wholly appropriate, as the 2021 Mirai is powered by the latest evolution of the brand’s advanced FCEV powertrain. The new Mirai is one part of an electrification strategy that also includes Toyota’s current and future hybrids and upcoming battery electric vehicles (BEVs). Toyota put the auto industry on the road to modern electrification in 1997 with the first Prius hybrid and today remains the global leader in gas/electric hybrid sales.

Built on the rear-wheel drive GA-L platform that also underpins the larger Lexus LS sedan, the 2021 Toyota Mirai makes a major design departure from the front-wheel drive first-generation version. The body is lower, longer, and wider, with its bolder stance accentuated by standard 19-inch alloy wheels.

The 2021 Mirai will roll into dealers with more grades, more options and a lower starting MSRP. The Mirai XLE grade has a starting MSRP of $49,500, which is $9,050 less than the starting MSRP of the outgoing 2020 Mirai. An Advanced Technology Package, which includes Bird’s Eye View camera, front and rear Parking Assist with Automated Braking and front seat foot illumination, can be added to the XLE for $1,410.

The Limited grade has a starting MSRP of $66,000, with optional 20” Super Chrome Alloy wheels available for an additional $1,120. Both the XLE and Limited grades have a Special Color price of $425 for Oxygen White, Heavy Metal, Supersonic Red and Hydro Blue (Limited only).

Mirai XLE grade will have a starting lease price of $499 a month, while the Limited grade lease pricing starts at $549 a month. Special launch incentives will be available when this next-generation Mirai first goes on sale, including special finance rates, retail cash back and launch cash back.

Each Mirai comes with up to $15,000 of complimentary hydrogen. Extended ToyotaCare, good for three years or 35,000 miles, will come standard with each Mirai. Other owner benefits include roadside assistance for three years (unlimited miles), an eight-year/100,000-mile FCEV warranty on key fuel cell electric vehicle components, a complimentary rental experience for up to 21 days during the first three years of ownership, and much more.

The 2021 Mirai introduces a new lighting signature for a Toyota sedan, with long, narrow headlights that sweep rearward into the fenders. Both grades are equipped with auto-leveling bi-beam LED headlights, multi-LED front and rear turn signal indicators, Daytime Running Lights (DRL), and clearance lights. The LED side marker lamps are etched with the Mirai logo.

As much as the new Mirai design catches the eye and tugs at the heart, it is bound to cheat … the wind, that is. The super-low 0.29 coefficient of drag owes not only to the body’s shape, but also to details such as optimized airflow through the wheel wells, a flat full undercover, aero stabilizing fins at the front edge of the side windows and windshield wipers that retract to a lower position when not in use.

The wipers show the kind of detail Toyota infused to raise comfort and convenience to a higher level in the Mirai. They feature direct-spray washer fluid arms, and, when in use, operate more quietly thanks to slower speed at the reversing point.

The second-gen Mirai features a more highly evolved FC system. Still 650v as in the first Mirai, the next-generation fuel cell stack is about 20 percent smaller and 50 percent lighter than the previous stack, and so fits easily under the hood. The new, smaller stack allowed the switch to rear-wheel drive. In comparison, the first-gen Mirai was FWD, and the larger stack was placed under a raised section of the passenger compartment floor.

A compact, lightweight power control unit is now integrated with the FC stack case, further reducing overall system size. Relocating the air intake manifold and optimizing the gas channel separator electrodes and seals has resulted in a 12-percent increase in power output over the first-gen stack (128kw, up from 114kw). That translates to 182 hp and 221 lb-ft. of torque vs. 151 hp and 247 lb-ft for the first-gen Mirai.

In the 2021 Mirai, a lithium-ion battery is smaller and lighter (98.3 lb. vs. 103.4 lb.) and has higher capacity than the nickel metal-hydride battery used in the first-gen model (310.8v and 4.0 Ah, compared to 244.8v and 6.5 Ah in the earlier car). The more compact battery package fits between the rear seat and trunk, and the trunk can carry 2-3 golf bags. Cooling air for the battery is silently pulled in from the cabin.

In the Toyota Mirai, compressed hydrogen fuel is stored in three 10,000-psi carbon-fiber-reinforced high-pressure tanks: one mounted longitudinally in the center of the car; another mounted transversely under the rear seat, and a third below the battery. The three tanks together hold about 11 pounds of hydrogen.

Driving the Toyota Mirai is like driving a Toyota Hybrid – meaning a thoroughly “normal” experience. Get in, buckle up, push the Start button, and the Mirai is ready to drive immediately. Shift the gear selector into D, and off you go. While the 2021 Mirai will initially be offered only in California, it is fully optimized for cold weather operation; the FC system has been tested in extremely cold conditions and can start at an outside temperature as low as -22°F.

Operation of the FC system and battery is seamless. Normal initial acceleration uses battery energy, like a battery EV would. After initial acceleration, it smoothly transitions to FC+EV operation, and then fully to FC power to the EV drivetrain when cruising. As a result, the driver feels a natural, linear response to the accelerator.

Like a Toyota hybrid vehicle, the FC also sends electricity to be stored in the battery, and the battery is also charged by the motor-generator during deceleration. Direct current from the battery is converted into three-phase alternating current for the FC air compressor and the electric drive motor. In the 2021 Mirai, a second DC/DC converter augments the main DC/DC converter to respond to the auxiliary load increase.

As on Toyota Hybrids, Predictive Efficient Drive can learn repeatedly traveled routes to optimize charging and discharging of the battery to help maximize fuel economy and driving range.

To make the second-generation Mirai its new sedan flagship, Toyota based it on the GA-L platform also used for the Lexus LS sedan. (The LS uses a larger version of the platform.) The change to rear-wheel drive and resulting new layout for the FC system and EV powertrain yield a near 50:50 weight distribution, versus 58:42 for the front-wheel drive first-gen Mirai.

The high-strength platform provides the foundation for superb handling agility and an exceptionally smooth, quiet ride. Laser screw welding and adhesive structure bonding, proven on many other Toyota and Lexus models, are among the construction techniques used to give the Mirai a truly premium feel on the road.

Toyota Safety Sense 2.5+ equips the 2021 Mirai to help avoid collisions or mitigate their impact. Also featured on other 2021 Toyotas, including the Camry and Highlander, TSS 2.5+ is the next phase in Toyota’s evolution of active safety systems. A number of functions that are part of the Toyota Safety Sense have been enhanced.

For starters, the Pre-Collision System with Pedestrian Detection (PCS w/PD), features multiple enhancements. By enhancing the system capabilities, it is now possible for the system to help detect not only the vehicle ahead but also a preceding bicyclist in daytime and even a preceding pedestrian in low-light conditions. TSS 2.5+ also enhances the PCS w/PD system with intersection support. At intersections, the system may detect an oncoming vehicle or pedestrian when performing a left-hand turn and may provide audio/visual alerts and automatic braking in certain conditions. Additional PCS functions include emergency steering assist, which is designed to stabilize the driver’s emergency steering maneuvers within their lane while avoiding a preceding pedestrian, bicyclist or vehicle.

Each Mirai comes equipped with Full-Speed Dynamic Radar Cruise Control (DRCC), which can activate the feature above 30 mph, have a system designed to perform vehicle-to-vehicle distance controls down to 0 mph and resume from a stop. DRCC also includes a new feature that allows for smoother overtaking of slower vehicles. If traveling behind a vehicle traveling slower than the preset speed, once the driver engages the turn signal and initiates steering input the system will provide an initial increase in acceleration in preparation for changing lanes; after changing lanes, the vehicle will continue acceleration until it reaches the preset driving speed.

Lane Departure Alert is designed to help notify the driver via steering wheel vibrations or audible alert if it senses the vehicle is leaving the lane without engaging a turn signal. When DRCC is set and engaged, Lane Tracing Assist (LTA) is designed to assist the driver by providing a slight steering force to help center the vehicle in its lane using visible lane markers or a preceding vehicle.

Additional TSS 2.5+ features include Automatic High Beams, which detects preceding or oncoming vehicles and automatically switches between high beam and low beam headlights. Road Sign Assist (RSA), which is designed to recognize certain road sign information using a forward-facing camera and display them on the multi-information display (MID). With DRCC engaged and activated, RSA can also adjust speed up to the posted speed limit if driving slower or down to the posted speed limit if driving faster than posted.

In addition to the TSS 2.5+ system, to help Mirai drivers change lanes with confidence, Blind Spot Monitor is designed to help detect and warn you of vehicles approaching or positioned in the adjacent lanes. Rear Cross Traffic Alert (RCTA) can offer added peace of mind by helping to detect vehicles approaching from either side while backing out and alerting you with a visual and audible warning.

Toyota will offer the 2021 Mirai in two grades, XLE and Limited, rather than only a top-of-line mono-spec version as with the first-generation model. The new strategy will make the Mirai accessible to a wider market.

Fuel cell technology pre-dates the automobile by half a century. In 1838, a Welsh physicist combined hydrogen and oxygen in the presence of an electrolyte and produced an electric current, though not enough to be useful. By the 1960s, the technology was being used in America’s Gemini and Apollo spacecraft, where it provided crews with both electricity and water from stored hydrogen and oxygen.

Fuel cells had been studied for the automotive sector, but the technology only recently became practical and cost-effective. Toyota began its fuel cell development around the same time as its original Prius nearly 25 years ago, and the Mirai shares technology from the company’s hybrid program.

Toyota developed the solid-polymer electrolyte fuel cells used in the first- and second-generation Mirai models. To help foster FCEV proliferation, the company has released over 5000 of its patents, royalty-free.

Toyota remains committed to fuel cell technology as a powertrain for the future. It is a scalable technology that can be made small enough to power a phone or large enough to power a building, or anything in between. For example, Toyota recently installed fuel cell powertrains in a fleet of Kenworth class-8 semi-trucks that are rated for a maximum 80,000-pound load. These big rigs are currently used for moving freight in and around the Ports of Los Angeles and Long Beach, California.

More FCEVs will be entering the market over the next few years, as the cost, size and weight of fuel cell systems are reduced and the fueling infrastructure grows.