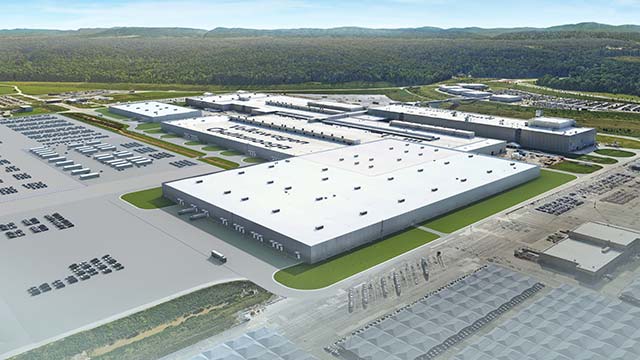 With the all-electric Volkswagen ID.4 due to be revealed in full-production form soon, Volkswagen has begun expanding its Chattanooga factory to build a North American center for electric vehicles – not only for assembly, but for engineering the EVs of the future.

To power those efforts, Volkswagen‘s Engineering and Planning Center in Chattanooga will soon feature a unique, state-of-the-art high-voltage laboratory designed to develop and test electric vehicle cells and battery packs for upcoming models assembled in the United States.

“There are two ways that auto companies approach the development of electric vehicle batteries,” said Wolfgang Maluche, Vice President of Engineering at Volkswagen of America. “A lot of them will farm out the development and testing of batteries to another company, and some will actually do the work of developing and testing in-house. We are doing the latter.”

The EPC plans to break ground on the lab soon, with the goal of being fully operational by spring 2021. It will feature cutting-edge equipment, including pressure testers, explosion-rated climate chambers and – perhaps the most unique – a custom multi-axis shaker table (MAST), which is designed to test the integrity of vehicle components in some of the roughest conditions they might face on the road.

Most automotive labs have MASTs, but almost none were designed for electric vehicle batteries. EV battery packs are the largest and heaviest component in an EV, typically weighing hundreds of pounds and running the width of the vehicle.

“The battery is not only shaking; it is going through a series of harsh conditions to test its durability in a variety of possible environments, from the South Pole to the Sahara,” said Jason Swager, the Director of Electrical Development. “We needed to build a MAST that could withstand the immense force and frequency that we need to test these batteries.”

To run a MAST at such high frequencies, Volkswagen had to design its own tool rather than using an outside supplier. The supports for the MAST will be buried 12 feet under the lab’s floor and buttressed with concrete to help withstand the forces in use. Volkswagen’s new lab will be only the second location in the country with a MAST of this size.

Beyond the tools, Chattanooga’s high-voltage lab will have other unique features. In line with Volkswagen’s goal to reach carbon neutrality by 2050, the lab is planned to be built to LEED standards for environmental impacts, through steps such as a battery-to-grid connection that sends unused energy back to utilities.

“This lab was planned to be as sustainable as possible,” said Maluche.

And the lab adds to the growing tech scene in Chattanooga. From the engineering work of Volkswagen and other firms to its early embrace of affordable gigabit Internet for its downtown business center, Chatta

Swager has lived in Chattanooga since 2009 and has seen the Engineering and Planning Center grow alongside the town. “It feels like gold rush time,” he said. “There is this great spirit in Chattanooga, where everyone is excited about what the city can become. It’s a great town for an engineer like me, but also for others in tech and start-ups.

“The future of driving is coming to Chattanooga. We have the chance to help shape how Volkswagen and the entire automotive industry engineers electric vehicles to be as safe and sustainable as possible.”