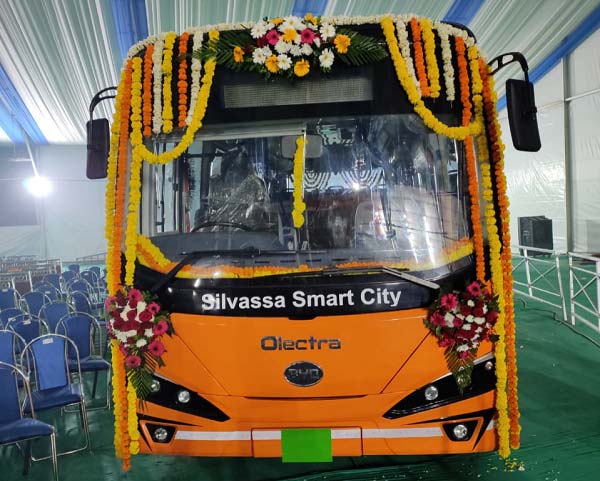 On February 17, BYD delivered the first electric bus in Silvassa, India, as witnessed by the current Indian President, Ram Nath Kovind, as part of his first visit to the western Indian city to launch a number of development projects.

Silvassa, a key industrial hub in India located between Maharashtra and Gujarat, India’s two major economic powerhouses. At the same time, Silvassa was also included in the list of Indian “smart city” proposed by India Prime Minister Modi. In this plan, the Indian government will establish 100 smart cities with modern facilities, with a total investment of more than about 500 billion yuan (€65.6 billion).

The electrification of public transport, as part of the construction of the “smart city” of Silvassa, is a local government priority. Thus, BYD successfully won the order for 25 K7 buses in January and successfully delivered its first vehicle on February 17. When the President Ram witnessed Silvassa launched its first pure electric bus which was made by BYD, he expressed that he was happy to be there at inauguration ceremony for public welfare and development projects, and was confident that these projects would give new energy and momentum to the development of the UT.

New Delhi declared air pollution a “public health emergency” in 2019, as the problem has increasingly choked India’s major cities during recent years. To counter this, The FAME program aims to promote the large-scale adoption and manufacture of electric and hybrid vehicles in India, and the program’s current second phase backs the adoption of 1 million electric two-wheelers, 500,000 electric tricycles, 55,000 electric passenger cars, 20,000 hybrid passenger cars and 7,000 buses.

At present, BYD is successfully serving markets in many other countries across Asia-Pacific, including Japan, Korea, Singapore, Australia and more. So far, BYD electric buses have occupied 60% of the electric buses’ market share in India. BYD’s pure electric buses and taxis have spread to over 300 cities, operating in more than 50 countries and regions.