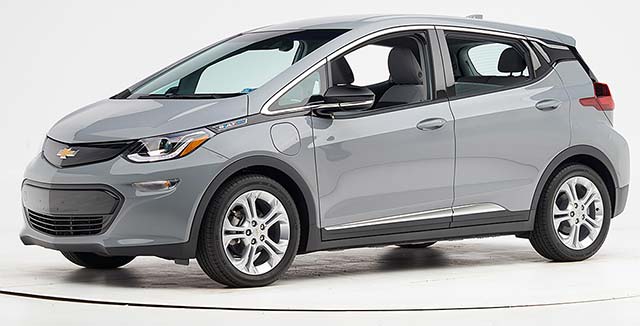 When the new passenger-side small overlap crash test rating was released in September, the Bolt was not named a Top Safety Pick because the poor headlight rating the car received in the 2017 model year had been carried forward to later years based on information provided by General Motors.

Following the September release, however, GM reported that the headlight aim had been adjusted during the 2018 model year to reduce glare. A new test confirmed that GM’s change had addressed the glare issue, and the modified lights earn an acceptable rating. The new rating applies to all 2019 models and 2018 models built after March 2018.

The Bolt earns a superior rating for its optional vehicle-to-vehicle front crash prevention system, which avoided collisions in IIHS track tests at 12 and 25 mph.

With the addition of the Bolt, three all-electric vehicles qualify for a 2019 safety award.