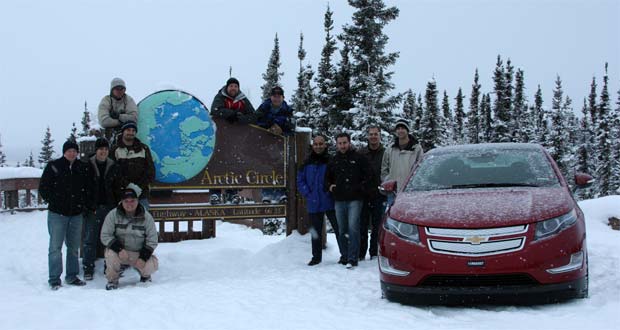 When the first Chevrolet Volts purchased by retail customers rolled off the delivery trucks in New Jersey recently, they were met with the season’s first major blast of winter weather.

One of the goals in developing the Chevrolet Volt was to create a plug-in electric vehicle suitable for everyday use regardless of weather. Typical northern winters take an even bigger toll on battery-powered vehicles than on traditional internal combustion-powered cars and trucks.

One of the big fears about electric cars was that extremes in temperature, both excessive heat and cold, would bedevil their systems and make them harder to cool or heat, or drain the battery in the process.

Engines produce plenty of waste heat that can be used to warm the air in the cabin and keep things comfortable. The inherently greater efficiency of an electric powertrain means less wasted energy, but it also means that the battery has to be used to power a resistive heater to produce that warm air – electrical energy could otherwise be used to propel the vehicle, which is one of the reasons why electric vehicles have a significantly shorter driving range in cold weather.

The Volt has several features designed to minimize the drain on the lithium ion battery while still affording occupant comfort. The exclusive OnStar MyLink smartphone app or the MyVolt.com website can remotely start the Volt and warm the cabin while it is still plugged in and drawing power from the grid, leaving the battery with a full charge to maximize the electric driving range.

Less energy is consumed maintaining the cabin temperature than heating it up, but even on the road the Volt has more to contribute. Heated seats available on the Volt require less energy to keep passengers warm and comfy than it does to heat the full volume of air in the car.

Using engine heat this way enables faster window defrosting and rear seat heating than taking energy from the battery.  Under light driving loads, the engine and generator also can put some electrical energy back into the battery during these heating cycles to extend the electric driving range.

“Volt drivers in Southern California will likely never experience this in their day-to-day commute, but if they pack up their gear and head into the mountains for some skiing, they will appreciate the enhanced cabin comfort made possible by this unique powertrain” said Andrew Farah, vehicle chief engineer for the Volt.

Even with all of the energy optimizations, the same mechanical factors that lower fuel mileage for traditional vehicles contribute to a shorter electric driving range in winter. Cold temperatures increase the viscosity and resistance of lubricants in transmissions and axles while roads covered in snow or slush increase rolling resistance causing the powertrain to work harder and drain the battery.

But the Volt’s engine generator dramatically reduces the fear of being stranded. When the lithium ion battery is depleted, the industry-first extended range capability allows the car to continue on for up to 340 additional miles.

“Volt engineers spent many frigid weeks in places like Kapuskasing, Ontario and Fairbanks, Alaska testing and calibrating the climate control system to make sure that drivers and passengers remain comfortable while still enjoying plenty of gasoline-free electric driving even in the harshest winter weather” said Farah.[wzslider height=”400″ lightbox=”true”]