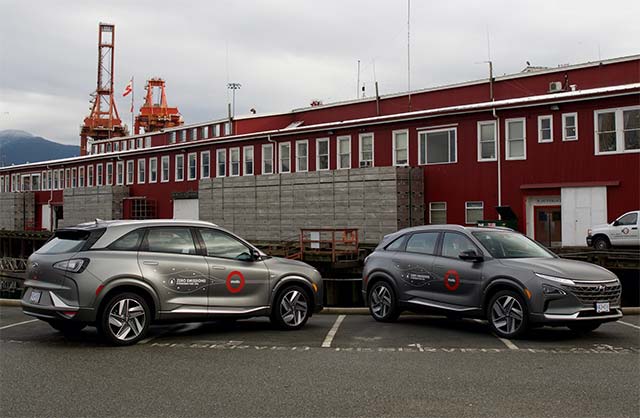 Hyundai Canada announced the national launch of the first-ever NEXO, Canada’s only fuel cell-powered SUV and the first vehicle of its kind to be made easily accessible to consumers. By collaborating with Modo, the first Vancouver-based carsharing co-operative of its kind, the NEXO will bring fuel cell technology to a much wider audience than ever before.

NEXO is powered by hydrogen, a fully sustainable energy source, which allows the vehicle to emit clean water vapour and purify the air as it is being driven. This technology also provides the vehicle with superior range conservation in cold climates compared to other battery electric powertrains, making them particularly resilient for Canadian winters. What’s more – a five minute refill will carry you for up to 570 km (354 miles).

Modo will make two NEXO vehicles available for consumer use in the coming weeks through its carsharing services. This collaboration will provide Vancouverites with unparalleled access to fuel cell vehicles, allowing more Canadians than ever to learn about and experience this technology firsthand. Hyundai will also be the first to make fuel cell vehicles available for retail sale through select local dealerships.

“Hydrogen vehicles are the most promising type of alternative powertrain transportation in existence today. It’s important for us to make innovative green technologies like NEXO readily available for Canadians to ensure a sustainable future,” says Don Romano, President and CEO of Hyundai Auto Canada Corp. “We’re thrilled to launch NEXO in B.C, as the province is a leader in implementing important sustainability initiatives and is aligned with our vision of introducing new means of clean mobility.”

Hyundai has always been a leader in sustainable transportation, remaining the only automaker in Canada to offer vehicles with four electrified powertrains including hybrid, plug-in hybrid, battery electric and hydrogen fuel cell. With the launch of NEXO, Hyundai becomes the only automotive manufacturer in Canada to offer a second generation fuel cell vehicle – the first being the Tucson Fuel Cell which launched in 2015.

“We are excited to be the first carshare to offer consumers the opportunity to experience a hydrogen fuel cell vehicle for themselves,” says Patrick Nangle, CEO of Modo. “Supporting a cleaner BC aligns with Modo’s social and environmental purpose as a member-owned co-operative. We are grateful to Hyundai Canada and the Canadian Hydrogen and Fuel Cell Association for their financial contribution in making this possible.”

While hydrogen fueling infrastructure is still in the early stages of development, Vancouver is home to one of Canada’s only public refueling stations located in the city’s Marpole neighborhood. Members of the public who are interested in test-driving NEXO are able to do so at the Vancouver International Auto Show, which runs from March 19 through 24.

Mar 19, 2019Blagojce Krivevski
BMW Group to have 25 electrified models by 2025Study: Lack of understanding and information is preventing motorists from taking the EV plunge