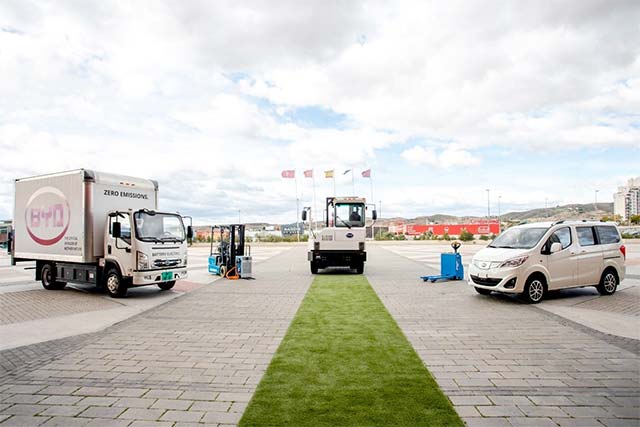 Two BYD pure electric on-highway trucks and one BYD pure electric van made their debut appearance in Europe last month at a premiere presentation in the Estadio Nueva Condomina stadium in the city of Murcia, south-east Spain.

BYD’s etruck range and vans have been proven in China and certain other global markets but has not previously been offered to customers in Europe.

The first trucks available to European customers are the T6 (7.5T GVW) light truck, which has a range of 124 miles, and the Q1M Yard Tractor (46T GCWR), the latter specifically designed for airport, port and distribution centres.

Also launched is the fully electric BYD T3, which is the first van BYD is bringing to Europe. It has a payload capacity of up to 800kg and like the T6 is fitted with BYD’s own ironphosphate batteries, giving it a range of over 124 miles, says the company.

These first units are the pioneers for a full range of 100% electric light and heavy commercial vehicles which BYD plans to roll out across Europe in the coming years.

Isbrand Ho, managing director of BYD Europe, said: “This is a highly significant step for BYD – the introduction of a whole range of proven and competitive zero emission vehicles spanning key sectors of the commercial vehicle sector.

“Our previous pure electric products have cemented their position in their respective categories – taxis, city buses and forklifts – this year we expect to have completed deliveries of 3,000 units to European customers.

“We are confident that this fourth product range – etrucks – will also win sales success even though the European CV sector is intensely competitive.”

Javier Contijoch, vice president of sales at BYD Europe, said: “BYD established its European electric truck division in 2018 and has since tested two of its prototype electric trucks across Europe.

“Spain was chosen as the first pilot market. The premiere of the BYD electric trucks is the start of the roll-out in Europe. Other European regions are soon to follow.”