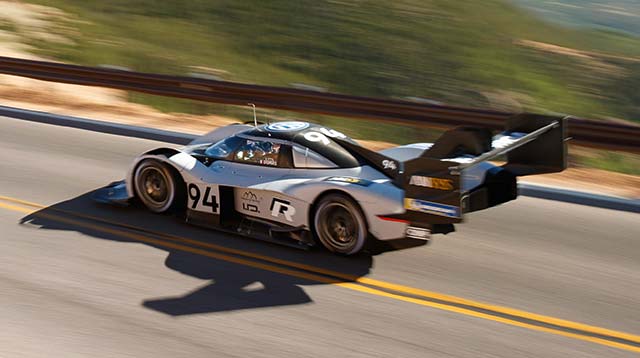 Volkswagen made motorsport history at the Pikes Peak International Hill Climb on 24 June. At the wheel of the 500-kW (680-PS), fully-electric I.D. R Pikes Peak, Romain Dumas (F) defeated cars powered by conventional drivetrain technology and, with a time of 7:57.148 minutes, not only smashed the previous record for electric cars, but also bettered the all-time record set in 2013 by Sébastien Loeb (F) – by fully 16 seconds.

Just 250 days had passed between the announcement of the Pikes Peak project on 18 October 2017 and the record-breaking run on Pikes Peak. The unique demands on the drivetrain technology, batteries and aerodynamics make the I.D. R Pikes Peak an extremely ambitious project.

This only adds to the significance of the new record set by Volkswagen’s electric racing car, which as the sporty forerunner to the I.D. family – the range of fully-electric production vehicles that Volkswagen plans to launch from 2020 onwards – is sending out a powerful message with regard to electromobility.

Below is a video which shows Dumas’ full record-breaking, eight-minute run in the I.D. R Pikes Peak from a helicopter perspective for the first time.