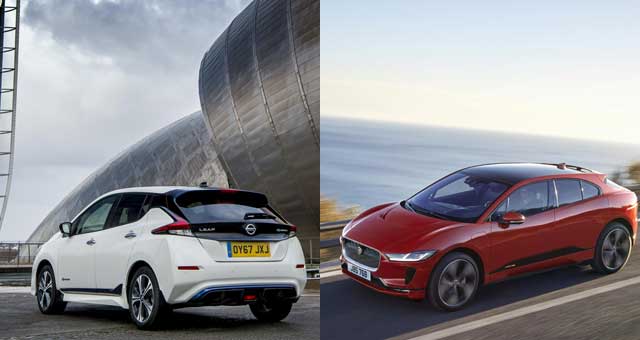 The new Nissan LEAF and the Jaguar I-PACE have been named a ‘Game Changer’ at the prestigious Autocar Awards 2018.

The Game Changer awards are given only to vehicles that bring new, higher standards to their class or for defying conventions for the benefits of buyers.

The annual awards ceremony, which celebrates the world’s best cars and the people who make them, was held last week at Silverstone Circuit.

Mark Tisshaw, Editor of Autocar, said; “Nissan’s purely electric hatchback is already a game changer, having sold to the tune of more than 300,000 units since its introduction in 2010. No zero-emission rival has managed to bottle quite the same blend of range and usability at an affordable price, though several have come increasingly close.”

The new Nissan LEAF, the world’s best-selling electric vehicle, is the icon of Nissan Intelligent Mobility. Made in the UK at Nissan’s manufacturing plant in Sunderland, the LEAF represents a whole new driving experience, designed to move people with greater exhilaration, confidence and connection to the world around them thanks to intelligent features such as ProPILOT, e-Pedal and bi-directional charging.

The Jaguar I-PACE has been named as a ‘Game Changer’ for “defying conventions and turning the established order on its head”. The all-electric I-PACE is fitted with a state-of-the-art 90kWh Lithium-ion battery, two Jaguar-designed in-house motors and a bespoke aluminum structure for 0-62mph in 4.5 seconds and a range of 298 miles.

The Jaguar I-PACE is the electric vehicle drivers have been waiting for. Clean, smart and safe, the I-PACE delivers sustainable sports car performance, next-generation artificial intelligence technology and five-seat SUV practicality to place Jaguar at the forefront of the EV revolution.

The new Jaguar I-PACE is available to order now from £63,495 (excluding government incentives).

“The Jaguar I-PACE is truly ground-breaking in its design and technology, and provides the blueprint for the future of the British car industry. It challenges every single convention associated with its maker, from its power source to its design and proportions – and on first acquaintance, it’s also been excellent to drive,” Mark Tisshaw said.