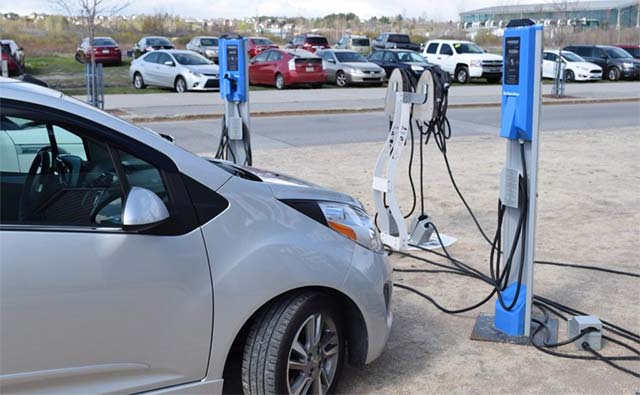 Québec residents will soon have improved access to electric and hybrid rechargeable vehicles, and a much wider choice of the most efficient models on the market. On December 13, the Government of Québec approved its Zero-Emission Vehicles (ZEV) Standard, making Québec the first province in Canada to regulate automakers and ensure sustained growth in the number of electric vehicles on the road for meeting the needs of the citizenry.

This standard is part of a continuum of solutions that have been implemented by the government to improve air quality, reduce greenhouse gas (GHG) emissions and place Québec on the road to a modern, low-carbon economy.

The Minister of Sustainable Development, Environment and the Fight against Climate Change Isabelle Melançon made the announcement at the Gravel Chevrolet Île-des-Soeurs dealership, which is located in the Minister’s Verdun riding.

In the words of Minister Melançon, “The whole world is advancing in the field of the electrification of transport, and Québec, which benefits from clean, renewable and abundant energy, needs to remain in the vanguard of this movement. Several automakers have shown the will to electrify all their vehicle models. The ZEV standard means that they will of necessity take the Québec market into consideration in their marketing plans. The positive effects of the standard are already being felt, with automakers announcing that some of their rechargeable vehicles (among the most technically advanced and environmentally-friendly on the market) will be available on a priority basis in Québec. This standard effectively helps car dealerships meet the electric vehicle needs of their customers.”

With transport accounting for 41% of Québec’s greenhouse gas emissions, reducing GHG in this sector of the economy is a Government of Québec priority for fighting climate change, but also for protecting the health of all Québecois. In addition to its benefits for air quality and reducing GHG, the ZEV standard will spark the transport electrification industry that holds great promise for modernizing the Québec economy and creating highly specialized jobs.

The ZEV standard is consistent with the targets set out in the Transportation Electrification Action Plan 2015–2020 and the 2013–2020 Climate Change Action Plan. It adds to a series of existing government measures that include a rebate on the purchase price of electric vehicles, funding for charging stations, the development of an extended network of charging stations in all regions of Québec and other zero-emission vehicle benefits such as the fee-free use of toll bridges.

The ZEV standard will change the business model of Québec automobile dealerships. Recognizing the importance of maintaining a dialogue process with key players in the transition to a greener vehicle fleet, the government is also announcing the creation of a committee whose mandate will be to monitor the evolution of this dossier. The committee, jointly led by the Corporation des concessionnaires automobile du Québec (CCAQ) and the Ministère du Développement durable, de l’Environnement et de la Lutte contre les changements climatiques (MDDELCC), will also rely on the expertise of the Coalition zéro émission Québec (CZÉQ) and Steven Guilbeault, Cofounder and Senior Director of Équiterre, who will represent environmental groups.

How the ZEV standard works

The standard will come into effect in early 2018. Automakers covered by the standard will earn credits through the sale of zero-emission (ZEV) or low-emission (LEV) vehicles to residents of Québec. Credits will be awarded in proportion to efficiency in zero-emission mode. The percentage of mandatory credits will be calculated on the basis of the total number of new vehicles sold or leased in Québec and manufacturers will start earning credits with model year 2018. Looking to the future, we anticipate that by 2025, ZEV and LEV sales and leases will account for approximately 10% of the market. Major automakers, those that sell or lease more than 20,000 vehicles in Québec annually, will need to earn a specified percentage of credits based exclusively on ZEV models, starting in 2020. Manufacturers that to not achieve their target will be required to purchase credits from other automakers that have excess credits available, or pay a fee to the government. Income will be paid to the Green Fund and used to support climate change projects, particularly those aimed at greening our vehicle fleet.

While the Québec standard in large part follows current ZEV standards in 10 U.S. states and provides the automobile industry with normative continuity on both sides of the border, one difference is that Québec regulations also permit vehicles that have been upgraded by carmakers and licensed for the first time in Québec to qualify for credits. This measure was included in the standard in order to make it possible for low-income households to also choose zero-emission vehicles.

Dec 30, 2017Blagojce Krivevski
China registered 490,000 plug-ins year-to-dateBMW i in the summit-club of the electric mobility world